“My Child – Mothers of War” performing at the Hudson Backstage Theater 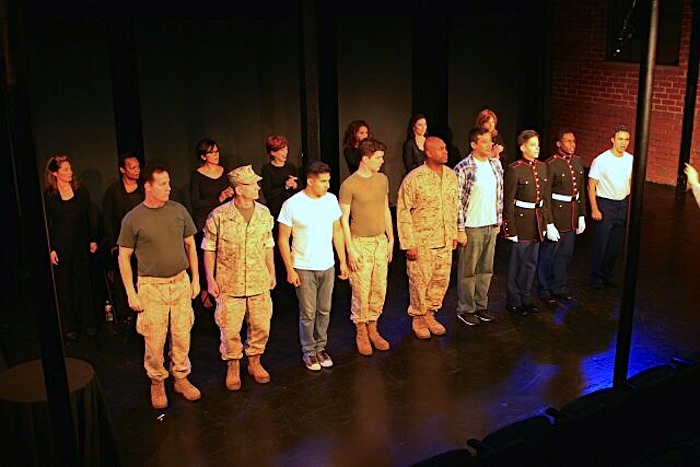 Greek American director Angeliki Giannakopoulos’ play is a collection of monologues based on true stories from the mothers who lost their sons in the Iraq and Afghanistan wars and has been performing to rave reviews and sold out audiences on Sunday nights at the Hudson Theater in Hollywood.

The play is based on the award-winning documentary by the same title that aired nationally on PBS in 2006. The director’s interest in the subject was piqued by reading articles in the Los Angeles Times documenting the stories of the mothers grieving their sons’ deaths and surviving their loss. Giannakopoulos was trying to make sense of those feelings and found herself unable to throw away the articles. Instead, she started collecting them and one day she decided to start calling the mothers. These conversations became the foundation of the stories you see on stage.

As George Pennacchio reported on ABC7 News, “The new play reminds us that soldiers have families who love them, waiting for them back home.” The roles of the six American mothers are portrayed by a very talented ensemble cast featuring Frances Fisher, Melina Kanakaredes, Mimi Rogers, Laura Ceron, Monique Edwards and Jean Smart.

The mothers have very different opinions, ideologies and social backgrounds but they are united in their love for their sons who perished in the wars and their struggle to bear their grief and move on. It is a staged reading but it is fully acted as the audience follows the mothers’ communications with their soldier sons, in Marine outfits, that begins during boot camp and phone calls while stationed in the desert up till their untimely deaths.

Worth noting is that all the actors work for free, 100% of the profits are donated to the Fisher House Foundation that provides “comfort homes” to military families during hospitalization. The homes are built on the grounds of major military and VA medical services and are free of charge! When we asked the director what message should the play convey to the audience she said that, “The play is a mother’s journey of how she says goodbye to her son that she will never see again and nothing will ever replace his loss, it is not a political play just a human account of lost life.”

She also emphasized that these American mothers “speak for mothers from all over the world.” Giannakopoulos had already directed an award-winning documentary on the same subject but “the emotions are far more powerful on the stage,” she admits.

The highly-regarded theater review site, “Stage Raw,” has selected the play on its Top Ten list, and you can see the remaining performances on Mother’s Day and on May 17th, 24th and 31st at the Hudson Backstage Theater located on 6539 Santa Monica Boulevard in Hollywood, Sundays at 7pm. For a complete list of appearances click here.