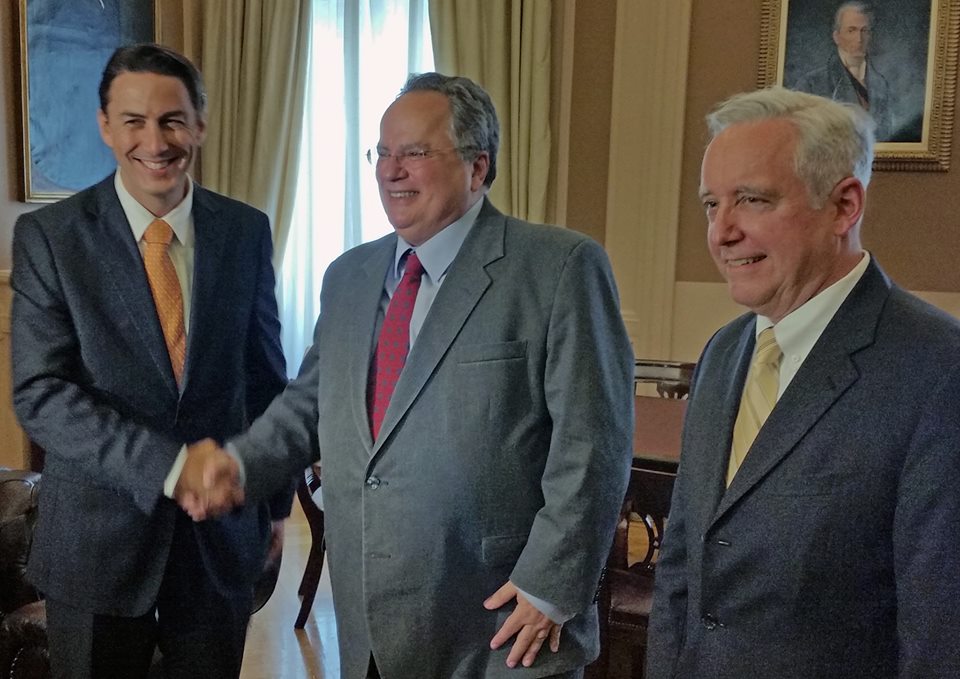 US State Department envoy for energy affairs Amos J. Hochstein, suggested to the Greek government not to give in to pressure by Russia regarding Moscow’s gas pipeline project during a meeting with Greek foreign minister Nikos Kotzias, in Athens on Friday.
Struggling for revenues, crisis-stricken Greece has been looking for new sources of income and the construction of “Turk Stream” gas pipeline could bring up to 5.0 billion euros to the country.
USA encouraged Greece to support the rival Western-backed plan that would bring natural gas supplies from the city of Azerbaijan to Europe through the Trans-Adriatic Pipeline (TAP) crossing through Turkey, Greece, Albania and the Adriatic Sea instead of the Turk Stream which would transport Russian natural.
Speaking to the press after his meeting with Nikos Kotzias, Amos Hochstein said: “What we agreed on is that it’s important to focus on what projects are on the table today and that is TAP, that will interconnect to the Azerbaijani pipeline. That is what’s on the table for Greece today.”
“Turk Stream doesn’t exist. There is no consortium to build it, there is no agreement to build it. So let’s put that to the side, and wait until there’s some movement on that and see if that’s relevant or not relevant and in the meantime focus on what’s important — the pipeline we already agreed to, that Greece already agreed to,” the US envoy added.
Greece’s Energy Minister Panagiotis Lafazanis presented Greece’s position in a statement that followed after the talks: “There is no reason why Russia should not be a supplier of gas into the region and the U.S. does not challenge that in any way, but having other sources of gas would help prices, reliability of supply and and it will also help take the political element out of the supply system.”
The United States is concerned that Greek consideration of an extension of a “Turkstream” pipeline across Greece will not increase energy diversification, may be of concern to EU competition authorities, and is not a long-term solution to Greece’s energy needs.
During his Athens visit, Special Envoy and Coordinator for International Energy Affairs at the U.S. Department of State Amos J. Hochstein held  discussions with Minister of State Nikos Pappas, Minister of Foreign Affairs Nikos Kotzias, Minister of Productive Reconstruction, Environment and Energy Panagiotis Lafazanis, and energy company officials.