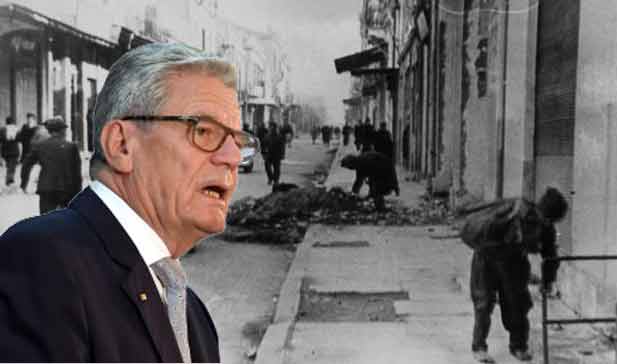 German President Joachim Gaucksaid that Germany should discuss the WWII reparations issue with Greece.
Speaking in an interview published in this Saturday’s edition of the Süddeutsche Zeitung, President Gauck expressed understanding for Athens’ calls for compensation, saying that Germany should examine its historical responsibility to Greece.
“We are not only people who are living in this day and age but we’re also the descendants of those who left behind a trail of destruction in Europe during World War Two – in Greece, among other places, where we shamefully knew little about it for so long,” the president said.
“It’s the right thing to do for a history-conscious country like ours to consider what possibilities there might be for reparations,” he added.
The presidency in Germany is a largely ceremonial post, but its holders are highly respected as elder statesmen.
Gauck’s comments were published after the German government last month rejected the latest claim by Athens for compensation linked to the Nazi occupation of Greece during the war.
He said the country’s General Accounting Office had calculated that Berlin owed it 278.7 billion euros ($312 billion). This figure included a 10.3-billion-euro repayment of a “forced loan” that the Nazis took from the Bank of Greece.
A day later, German Economy Minister and Deputy Chancellor Sigmar Gabriel rejected Greece’s assertion as “quite frankly stupid.” Another government official warned Greece against using the claim to try to muddy the waters of Greece’s negotiations with its international creditors over further financial assistance.
(source: DW, Süddeutsche Zeitung, DPA)