GRNews
GreekReporter.comGreece7 Greeks in the 500 Most Important Soccer Players on the Planet 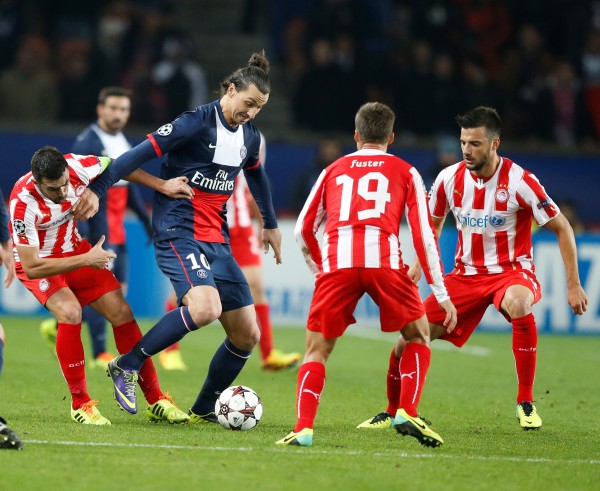 The most popular sports magazine in the world, World Soccer, formed a list with the 500 most influential soccer players on the planet of which 7 Greeks are part of.
The list consists of names such as Cristiano Ronaldo, Lionel Messi and Zlatan Ibrahimovic but also Kostas Manolas and Giannis Maniatis. The body in charge of drawing up the list started off by picking 50 key players from the leading leagues in Europe (England, Germany, Spain), 40 for France and Italy, between 15 and 25 for mid-ranked leagues, and ending with between five and 10 for smaller leagues. They then added players who were important figures for their national sides and in their respective regions.
They gathered 12 players from the Greek league, Nikos Karelis (Panathinaikos), Giannis Maniatis, Alvaro Botia, Ibrahim Afellay, Alejandro “Chori” Dominguez, Artur Masuaku (Olympiakos), Dimitris Kolovos (Panionios), Christian Noboa, Stefanos Athanasiadis, Alexandros Tziolis (PAOK), Alan Poulido (Levadiakos) and Nikos Kaltsas (Veria), as well as Kostas Manolas from AC Roma. Below each one’s specific description:
Ibrahim AFELLAY – Olympiakos/Holland/02/04/1986
Winger who is rebuilding his career on loan in Greece after a knee injury curtailed his impact at Barcelona.
Stefanos ATHANASIADIS – PAOK/Greece/24/12/1988
In fine goalscoring form for PAOK in this season’s Europa League, including an 18-minute hat-trick against Dinamo Minsk.
Alberto BOTIA – Olympiakos/Spain/27/01/1989
Centre-back and former Barcelona trainee. Had spells with Sporting Gijon, Sevilla and Elche before moving to Greece last summer.
Alejandro DOMINGUEZ – Olympiakos/ Argentina/10/06/1981
Much-travelled forward enjoying a final career flourish in Greece. A former World Youth Cup winner.
Nikos KALTSAS – Veria/Greece/03/05/1990
Goalscoring winger who will move to Panathinaikos in the summer. He has played for Greece at under-19 and under-21 level.
Nikolaos KARELIS – Panathinaikos/Greece/24/02/1992
Attacking midfielder or second striker who is set to play a key role for a new-look Greece after scoring on his international debut last autumn.
Dimitris KOLOVOS – Panionios/Greece/27/04/1993
Attacking midfielder, widely touted as one of the biggest talents in Greek football. Thriving back at his first club Panionios, on loan from Olympiakos.
Giannis MANIATIS – Olympiakos/Greece/12/10/1986
Defensive midfielder and captain of his club side. Was a key figure for his country at both the 2012 European  Championship and the 2014 World Cup.
Kostas MANOLAS – Roma/Greece/14/06/1991
Centre-back who left Olympiakos last summer and has quickly impressed with his performances in Serie A for his new side.
Arthur MASUAKU – Olympiakos/France/07/11/1993
Under-21 left-back who has impressed during his first season in Greece, prompting much talk of a move to Serie A.
Christian NOBOA – PAOK/Greece/09/04/1985
Midfielder who moved to Greece in January after eight years in Russia with Rubin Kazan and Dynamo Moscow. Key figure in the national team.
Alan PULIDO – Tigres/Mexico/08/03/1991
First Mexican player to challenge its league on a transfer issue. Went AWOL over an alleged fake signature tying him to Tigres until 2016.
Alex TZIOLIS – PAOK/Greece/13/02/1985
Much-travelled defensive midfielder who has played in Germany, Italy, Spain and France, and remains a mainstay of his national side.
Noteworthy however are the absences of the Greek League’s MVP last year, Marcus Berg as well as key figures of Olympiakos’ impressive Champions League efforts last year, Kostas Mitroglou and goalkeeper Roberto Jimenez.