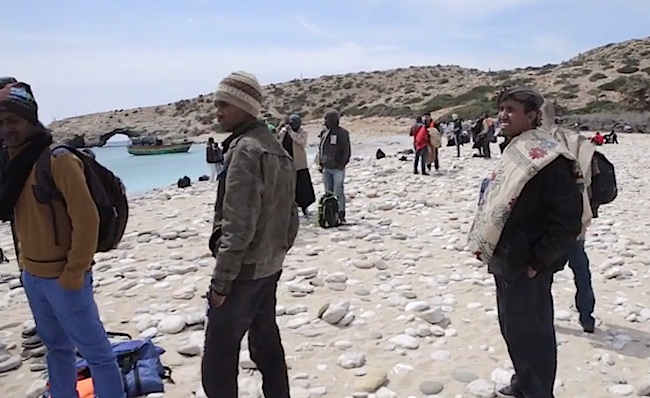 The number of undocumented migrants located on Thursday on various parts of the small island of Gavdos, south of Crete, Greece , is 140, according to police from Chania on the nearby island of Crete.
According to sources, the migrants arrived on a large fishing boat in the area of Tripiti, just off the southern coast of the island, from where they managed to reach the shore by themselves.
Those located are being led to the main village on the island, Kastri, a process that is proving difficult as the distance is quite long and the migrants are exhausted. They are expected to be housed in various venues until it is decided how they will be transferred elsewhere. Three of them were transferred to hospitals in Sfakia on Crete; one of them is a pregnant woman.
The migrants, among who are women, children and elderly, will spend the night at the local primary school and are currently being examined by the islands’ nurse. Local residents have mobilized to secure food and water for the people.
A Greek Coast Guard boat which reached the area this morning searched the sea area where the fishing boat was located but didn’t find any migrants. Another vessel is transferring doctors, medical equipment and police officers from Sfakia in Crete to Gavdos, but because of the strong winds authorities cannot send a larger boat with supplies.
Gavdos Mayor Evangelia Kallinikou spoke with Alternate Minister for Migration Policy Tasia Christodoulopoulou, who pledged she will send a helicopter with supplies and tents.
In the meantime, the Coast Guard is continuing the search operation to locate more people.
(source: ana-mpa)