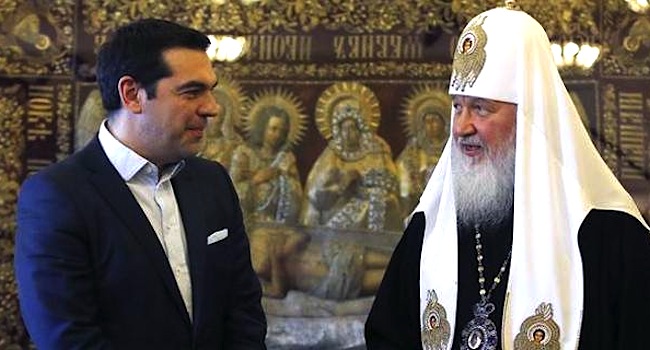 The Russian people and its Church feel compassion for their spiritual brothers the Greeks and wish their government success in its mission for a socially-directed economy and society, Patriarch Kirill of Moscow and All Russia said on Thursday, welcoming Greek Prime Minister Alexis Tsipras.
It was the last meeting in a full-schedule three-day official visit to Moscow.
The leader of the Russian Orthodox Church welcomed Tsipras and the Greek delegation to the Monastery of Daniel and expressed the hope that the premier and his government would “support and retain the spiritual and ethical foundations of the life of your people.” “Don’t forget that being Christian is not a political stance,” he added, saying that only with a “spiritual base” could a country hope for true social justice.
He added that it was wrong to believe the church could not coexist with the Left. “If the Church follows a political life, then it ceases to belong to all the people,” Patriarch Kirill said, mentioning also religious tourism and the importance the Russian orthodoxy gives to Greece ‘s Mt. Athos monastic community’s 1,000-year anniversary in 2016.
Tsipras conveyed the warm regards of Ecumenical Patriarch Bartholomew and Archibishop Ieronymos of Athens and All Greece and said the Left and orthodoxy shared many values, including care for one’s neighbor, the weaker, and tolerance.
The meeting of less than an hour also saw the pair agree on the need to put an end to the EU-imposed sanctions that have badly hit Russia’s economy.
(source: ana-mpa)