TechNews
GreekReporter.com Greece Greek Defense Minister Visits the US Amid Controversy Caused by His Comments 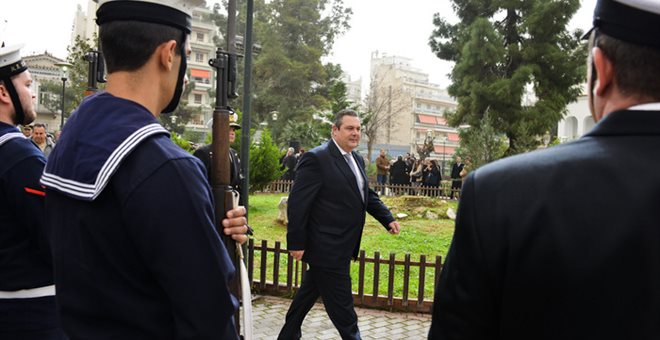 Greek National Defense Minister and junior coalition government partner Independent Greeks (ANEL) leader Panos Kammenos will visit New York this weekend in order to participate to the March 25 Greek Independence Day celebrations. The previous days, Kammenos caused a controversy leading to the US Congress not passing a resolution commemorating the Greek revolt against the Ottoman rule for the first time in 30 years!

This years’ ceremonial resolution has been blocked by Indiana Republican Senator Dan Coats, in response to Kammenos’ comments over Greece allowing irregular migrants to travel to other European states if Athens comes to a disagreement with its creditors over the country’s bailout program. “If they decide a blow to Greece, then they should know the migrants will get papers to go to Berlin. If Europe leaves us in the crisis, we will flood it with migrants, and it will be even worse for Berlin if in that wave of millions of economic migrants will be some jihadists of the Islamic State too,” Kammenos said earlier this month, causing Coats’ firm reaction. The Republican Senator demanded an official statement issued by Greece that would condemn Kammenos’ statements, explaining these do not constitute official government policy. If the statement was issued, he would allow the resolution, he explained.

The Indiana Senator had earlier sent a letter to Christos Panagopoulos, Ambassador of Greece to the United States, expressing concern about Kammenos’ statements. In his letter to the Ambassador, Coats wrote, “I believe it is in your interest as well as ours that you or another senior spokesman of the Greek government publicly comment on those threatening statements and clarify whether they reflect current policy or thinking within your government. With such clarification, I hope I will be able to support the Senate resolution regarding Greek independence and our shared democratic traditions.”

The Senator’s stance has managed to upset Greek-Americans across the country. The American Hellenic Institute (AHI), a non-profit Greek-American think tank, sent a letter to Coats today, expressing disappointment for his action to place a hold on the resolution recognizing the 194th anniversary of the Greek independence, celebrating democracy in Greece and the United States, and keeping the Senate from passing it. “We are extremely disappointed that Senator Dan Coats has taken such drastic action to express concern about the Minister’s flippant comment,” AHI President Nick Larigakis said. “Greece’s contributions to the security interests of both the United States and NATO are quite clear and evident. Our letter details Greece’s unwavering commitment to United States’ security policy and should alleviate any concern the Senator has about it. We urge the Greek-American community to contact Senator Coats today and urge him to let Senate Resolution 105 pass,” he added.