GRNews
GreekReporter.comGreeceGreeks Gathered for a Different Kind of Parade in Downtown Athens

Greeks Gathered for a Different Kind of Parade in Downtown Athens 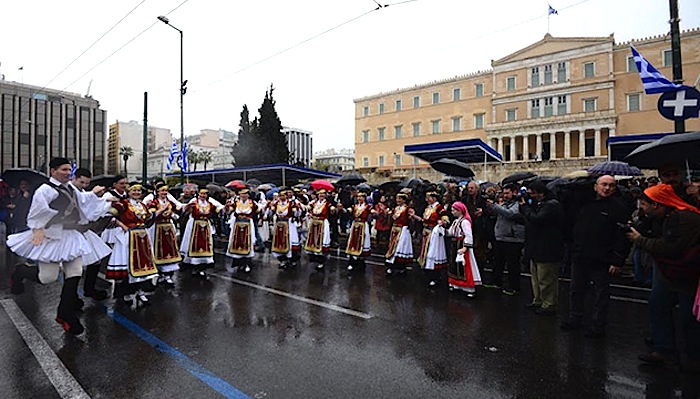 Thousands of people gathered in Syntagma, downtown Athens, Greece, despite the rain, to watch the annual military parade in honor of the Greek Independence Day, celebrated on March 25. The parade took place in the presence of the President of the Hellenic Republic Prokopis Pavlopoulos, Greek Prime Minister Alexis Tsipras and Greek Parliament President Zoe Konstantopoulou.
For the first time in years, the celebrations took place without barriers to hold back the crowd, while police officers observing the area were very discreet. Officials observed the parade from the Tomb of the Unknown Soldier before the Parliament building on low stands set without metal barriers and allowing a view of the central part of the monument, in a break from previous years.
Parade participants included representatives from all armed forces, special forces, the fire brigade and the police as well as forces from the northeast border prefecture of Evros, a national guard unit from Rhodes and carriers of historic banners from the Greek War of Independence against the Ottoman Empire that broke out in 1821. Furthermore, retired wounded veterans, nurses and Red Cross staff, followed by anti-missile and tank units also marched in commemoration of the Greek Independence Day.
After the military parade was over, the crowd gathered for a great “glendi” filled with dances and music, provided by the military band and dance associations.
Greek President Pavlopoulos said, “The parade proves that the March 25 anniversary is not a simple anniversary; it is a living experience and the great message of the uprise is the heroic contemplation of freedom,” he added.
Hellenism is waging its own battle under a united front, sending a message to all European people about the fundamental values of humanitarianism, freedom and social justice, Pavlopoulos said. These are the truths we must build the European building on, he stressed, adding that “I hope next year our people live under better conditions and away from the nightmare that wounds them deeply.”
“Today we must remember that nothing was given to us for free, everything was claimed after struggle, and when you are right, then you win,” Greek PM Tsipras said, noting that the Greek revolution “obliges us to vigilantly guard the Greek people’s freedom, independence and dignity.” “When the Greek people demand something, are decisive and have justice on their side, they can achieve anything,” he concluded.