German Politicians in Support of Greek Plea for War Reparations 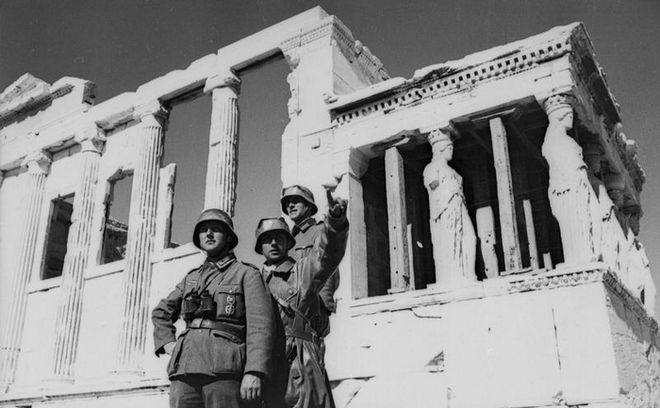 Leading politicians from the junior partner in Germany’s coalition government expressed their support to the idea that Germany should pay reparations from World War II to Greece, saying that it is their country’s moral and legal duty. In an interview with the German magazine Der Spiegel, published today, the German politicians highlighted that the war reparations issue should be separated from the ongoing Greek debt debate.

“It is about recognizing the fact that we committed a serious injustice in Greece,” the chairwoman of the Social Democratic Party (SPD) Values Committee, Gesine Schwan, told Der Spiegel. The German politicians’ group public statements come in complete contrast with Berlin’s official stance on the matter. The German government has repeatedly stressed that the issue was closed five decades ago, with a 115 million deutschmarks arrangement under an agreement with several European governments, while as Berlin argues, was an extensive system of compensatory measures in place that Greece also benefited from.

The reparations in question are dating back more than 70 years and are related with Greece’s Nazi occupation between 1941 and 1944, when thousands of Greeks were murdered, entire villages were destroyed, infrastructure ruined and Greece was forced to give Germany a loan. According to Germany’s official reasoning, the war reparations claims were settled under the “Two plus Four Treaty,” signed by the United Kingdom, France, the former Soviet Union and the United States.

According to the Treaty, which was signed 25 years ago, in September 1990, the four powers that occupied Germany at the end of World War II renounced all rights they held in Germany, allowing a united Germany to become fully sovereign the following year. No reference to war reparations was made in the Treaty and it was recognized as a legal commitment within the framework of the Paris Charter, also adopted by Greece.

On his behalf, the SPD’s Deputy President Ralf Stegner highlighted that “we should hold a discussion about reparations,” explaining that there were human rights issues that have not yet been cleared up and “we should not connect the matter of the reparations with the current debate about the euro crisis.”

Among those in support of the Greek claims in Germany is the opposition Greens’ party leader Anton Hofreiter, who said that his country “cannot just sweep the demands of Greece off the table. Morally and legally,” adding that “this chapter is far from complete.”

Until today, only the opposition Left Party in Germany had supported the Greek plea, while last month the Vice Chancellor and SPD’s leader Sigmar Gabriel has ruled out the discussion over reparations. Similarly, Chancellor Angela Merkel’s spokesperson Steffen Seifter said “it is our firm belief that questions of reparations and compensation have been legally and politically resolved.” In the same context Germany’s hardline Finance Minister Wolfgang Schaeuble used strong words towards the Greek government. In a speech at the Konrad Adenauer Stiftung, he said “they won’t get their debts paid by conjuring up German obligations from World War II.”

Last week Der Spiegel became the first German publication to propose that World War II reparations should be paid to Greece in order to close the matter and subtract an argument from Greek Prime Minister Alexis Tsipras’ negotiations quiver. The article noted that such a move would be politically and morally correct, and added that this will also reduce the arguments of the Greek side. “Alexis Tsipras has threatened the confiscation of German property in Greek territory,” the article stated, regarding Greek media reports on the matter, which said that this would be the Greek government’s “plan b,” while adding that Defense Minister and junior coalition government partner Independent Greeks (ANEL) leader Panos Kammenos has argued that the war reparations payment would be a good solution for today’s debt crisis. “Seventy years after the war ended and while there has been a large transfer of funds through the European Union, this is not honest,” Spiegel noted, blaming the German government for helping the Greek criticism when appearing unwilling to discuss the matter and repeating that it has already been settled.