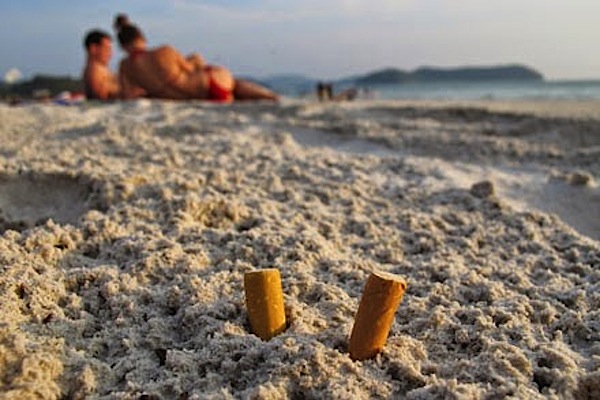 Greece relies on tourism for its economy and must protect its beaches through a policy directly linked to managing garbage and household waste, head of the European Commission office in Greece Panos Karvounis said on Thursday, during a one-day meeting of the Mediterranean SOS Network (MedSOS), an Athens-based NGO.
MedSOS just completed the European project Life Ammos on a “Comprehensive information campaign to limit smokers’ garbage on beaches.” Implementing the program were MedSOS, Terra Nova Ltd., the University of Patras, Marc SA and the EU funding medium Life. Funding was also provided by the Green Fund and Blue Star Ferries.
Karvounis said the European Commission was in continuous dialogue on how to manage garbage in the sea, by implementing a series of measures that focus around making the public and consumers more aware. In recent years, EU-wide, there are 4,000 projects totaling 3.5 billion euros, of which 220 projects worth 300 million euros relate to Greece. Life, a new EU program, targets viable growth and includes climate and environmental actions and includes provisions for an additional funding of 3.5 billion euros, he noted.
“Small objects of garbage are as important as larger pieces,” board manager of MedSOS Evangelos Koukiasas said, adding, “If we can convince Greeks not to throw their cigarette butts on beaches, we can achieve many more things.”
Marina Markovic, United Nations Environment Programme/Mediterranean Action Plan (UNEP/MAP) specialist on viability, said among other things that 80 percent of garbage at sea is of land origin, while 83 percent of garbage consists of plastics (bags, bottles and bottle caps) and urged action on the major problem of sea pollution.
University of Patras geology professor George Papatheodorou said that the Patras Gulf contained 437 pieces of garbage per square kilometer, according to university studies, and pointed out the major effects this had on the seabed and on marine ecosystems.
Greece is significantly behind in environmental actions, national representative of the Life program George Protopapas said, as only 6 percent of foreseen funds was absorbed by the country.
MedSOS representatives Natalia Roumelioti said that cigarette butts polluting the world amounted to 4.5 trillion annually, while Greece was the first country in Europe in terms of smokers, including very high rates among younger people.
A series of actions to correct the public’s misconceptions about the issue include technology-supported tools, info kiosks on 15 selected beaches, voluntary cleanups and games, publishing of information online and through the printed press, radio and television ads, social media pages and a complete educational package, among other things.
(source: ana-mpa)

Two Killed in Private Airplane Crash Off the Coast of Samos