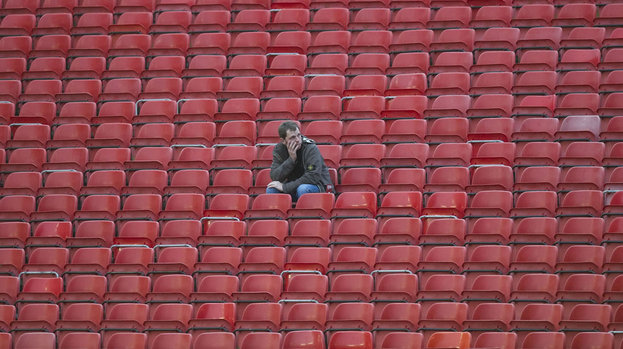 Deputy Sports Minister Stavros Kontonis announced that after what happened at the Olympic Athletic Center of Athens (OAKA), the next Super League match would be held behind closed doors, with no fans on the stands.
On Wednesday, March 11 the football match between Olympiakos and AEK was abandoned after a late Olympiakos goal sparked crowd violence. AEK supporters then invaded the pitch, while someone threw a flare at Olympiakos players, who were celebrating at that moment. The violent incident occurred just two weeks after Greek authorities suspended top league games for a week following a similar incident.
This will be the second consecutive weekend with no fans in the stands, following the penalty enforced after the Panathinaikos vs Olympiakos match riots and the clash between club officials at the Super League governing board.
“By decision of Deputy Minister for Culture, Education and Religion Stavros Kontonis and following the recommendations by Hellenic Police and DEAV [the commission against violence], the 28th round of games will take place behind closed doors. The decision will be forwarded to the organizing authority,” read the ministry’s announcement.
Meanwhile, this decision only impacts the Greek Super League football teams, despite the fact that riots have occurred in other team sport matches, such as basketball and volleyball.
Violence among sports is a common occurrence in the country and Greek authorities are making efforts to tackle the issue. Only last weekend, when fans were not allowed in the stadium, two people were injured during a fight between PAOK and Aris fans in Thessaloniki. Both men ended up in the hospital, one of them was seriously injured.