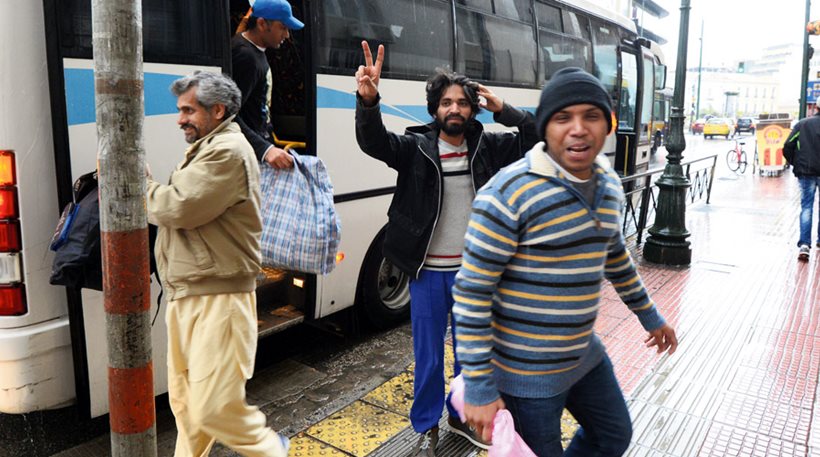 The evacuation of the Amygdaleza migrant detention center continues at a rate of 30 migrants per day. The migrants go through an evaluation committee and they are given temporary permits to stay in Greece.
The migrants are transported from Amygdaleza by police-escorted buses and released at Omonoia Square at the center of Athens. They can use the documents they have obtained by the committee to apply for repatriation or move to the destination of their choice in Europe.
Deputy Citizen Protection Minister Yiannis Panousis has pledged to close down the Amygdaleza facility within 100 days citing inhumane living conditions.
A police official said the release plan dictates that asylum seekers are released first, once their files are investigated. Underage migrants come second along with other vulnerable groups. They are followed by those who have been detained for more than six months.
About 500 of the 1,500 detainees at Amygdaleza have been detained for over six months, 60 of them are underage, while 200 of them have applied for political asylum. Also, about 100 of them are detained for criminal charges.
Panousis: Greece will violate the Schengen Agreement if Europe doesn’t solve immigration problem
The Greek deputy minister has complained that the European Union is not sensitive to the issue of illegal migrants and Greece considers proceeding to a unilateral violation of the Schengen Agreement as a last resort to solve the problem.
“If Europeans do not understand what we say, then let us break the Schengen Agreement and give documents to 300,000 immigrants who will scatter around Europe,” Panousis told Skai television journalist Pavlos Tsimas on Sunday, stressing, however, that this was his personal opinion.
“It will take two years to change the Dublin Agreement but Greece will have 2.5 million illegal immigrants until then,” he noted.
Panousis has received hard criticism from German police authorities on his statements. National chairman of the German Police Federation Rainer Wendt said that the threats of the Greek deputy minister do not have a place in the European Union values.
Wendt said that if Greece opens its borders, European governments should expel the country from the Schengen zone and bring back border control between Greece and the EU countries.l