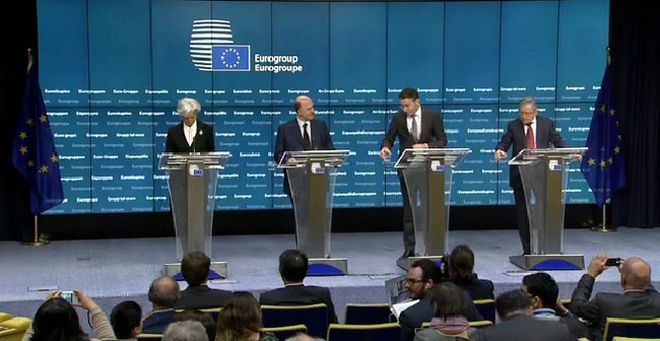 Without an agreement between the Greek government and the country’s European partners concluded a few minutes before 8:00 pm the critical Eurogroup held today in Brussels. The Greek side has characterized the Eurogroup draft statement as “unacceptable” and “unreasonable,” clarifying that no agreement can be reached under such circumstances. The draft text that was leaked hours earlier caused Greek Finance Minister Yanis Varoufakis‘ immediate negative response.
According to the Greek side’s non-paper, “the Eurogroup presented a text as a basis for discussion that is a radical withdrawal from the joint statements made by Mr. Dijsselbloem and Greek Prime Minister Alexis Tsipras last Thursday. Certain circles’ persistence on the implementation of the Memorandum by the new Greek government is unreasonable and unacceptable. The implementation of a Memorandum program has ‘left’ the table at the EU Summit. Those who restore it are wasting their time. In these circumstances, there can be no agreement today.”
Jeroen Dijsselbloem: Disappointment over lack of common ground
On his behalf, Eurogroup President Jeroen Dijsselbloem explained after the meeting that the Eurogroup did not reach an agreement last Wednesday and following this development he and Tsipras agreed to start technical work on the bailout, as to examine how Greece could cover the 30% of their bailout program that they want to abandon. Earlier today, institution officials reported back and the Finance Ministers had a slight sense of disappointment over the work, and the fact that there was “no firm common ground” on what a new program would look like. The general feeling in today’s meeting was that the best thing for Greece authorities would be to seek an extension to its program, Dijsselbloem highlighted, adding that “we simply need more time to examine Greece’s proposals, so an extension would give us the ability to do that work.”
Christine Lagarde: No disbursement if an extension is not agreed
Questioned whether the International Monetary Fund (IMF) is worried about the developments, the Fund’s Managing Director, Christine Lagarde, explained that the IMF’s program expires in March 2016, while a program review is overdue. “If Greece requests a bailout extension, and commits to implementing its current program, then we can continue to work together. But if the conclusion is that this is not the case, then disbursement cannot take place and there could then be discussions about new terms and conditions,” she underlined. “That is the difference between an extension and a bridging arrangement,” Lagarde said, explaining that an extension includes a pledge to continue with what has already been agreed and therefore Greece gets bailout funding.
Pierre Moscovici: Greece will have to submit an extension request
Finally, the European Commissioner for Economic and Financial Affairs, Taxation and Customs, Pierre Moscovici, characterized the talks as “constructive, but not concluding.” As he pointed out, “Greece will have to submit a program extension request. We will continue the dialogue this week, but it is up to Greece to take the necessary steps. There is a common desire for flexibility, avoiding unilateral actions. The European Commission will contribute and play its role but the context in which we are discussing is the Eurogroup. It is time for logic to prevail, to find a common ground and respect both the Greeks and the Europeans.”
According to preliminary information, a new Eurogroup meeting will be held again on Friday, in what is seen as a deadline for the Greek government to submit an extension request.