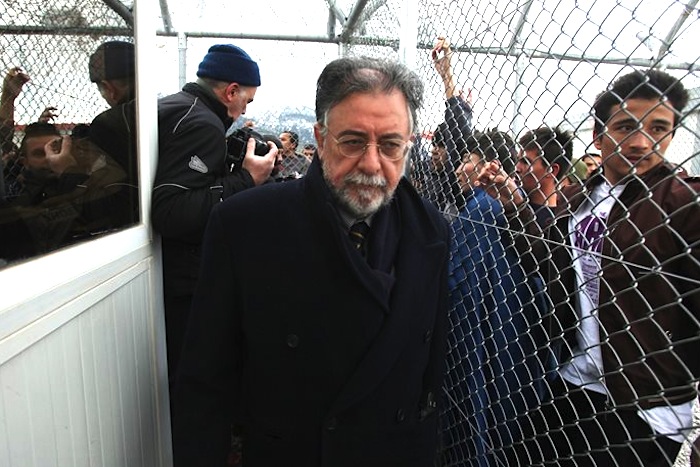 Greek Alternate Minister for Civil Protection Yiannis Panousis said on Saturday he was “ashamed as a human being” after seeing the foreigners’ detention center in Amygdaleza, north of Athens, Greece, where a Pakistani national, 28, hanged himself late on Friday night in the container used as temporary housing.
“I came to express the sadness and grief of the ministry and the government,” he said, “but now I express my shame, not as a minister, but as a human being, as a representative of a civilization.”
He said that the detention conditions for undocumented migrants were unbelievable, and clarified that this had nothing to do with the behavior and attitude of the police, which was correct, but with the idea of creating such centers. “It is not the image of a European country and of a country that respects human beings,” he said, and stressed that the detention centers would be replaced by “open hospitality centers.” The whole system would be overhauled in cooperation with Alternate Minister for Migration Policy Tasia Christodouloupoulou, he added, to guarantee acceptable conditions for detainees.
Anti-racism organization members had been rallying at Amygdaleza since early on Saturday, leaving only after the minister’s visit. Deputies and representatives of parties and agencies also arrived at the controversial center, where conditions for both adults and children have been the focus of protests several times in the past.
“We are all here — parties, agencies, all of Greece — and Greece cannot sustain such an image. We will change everything,” Panousis said.
The 28-year-old Pakistani was found in a container serving as a holding cell on the first day of his transfer to the center; he was discovered by fellow detainees at 2 a.m. on Saturday. He was arrested on December 12, 2014 in Rethymno, Crete, for illegal entry and residence and transferred to Athens two days ago, kept overnight at the foreigners’ directorate of Attica on Petrou Rallis Street before being taken to Amygdaleza.
Police attributed the death to suicide but an autopsy is scheduled for Sunday. Detainees protested over the incident, the second one of a young person in the last few days, following initial information that he killed himself over the length of his detention.