A Greek Photographer in the Heart of CERN 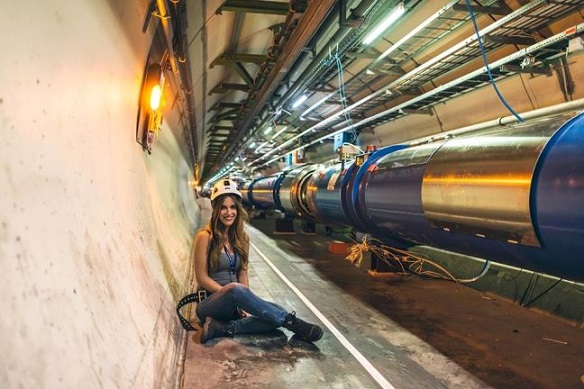 At the young age of 22, Greek photographer Anna Pantelia has already made the first steps towards a successful and fascinating career. As part of an educational program, Anna arrived at CERN, where she works as an intern, photographing the “experiment of the century.”

“I was proposed a job position that I could not refuse,” she said. “I never thought that I would go from Athens to Geneva, or that I would be working for the European Organization for Nuclear Research.”

Anna was born and raised in Athens. She always loved communication and photography, which led to her studies at the Technological Education Institute of Athens, in the Photography and Audiovisual Art Department. In 2009, she continued her studies in Germany, thanks to the ERASMUS program and then returned to Athens.

Upon her arrival she was proposed an internship in CERN by a NTUA professor. It was an offer she could not refuse.

At the moment, Anna Pantelia works at CERN as a photographer. Her job is to photograph visits, conferences, events and the employees who work in the tunnel. “Every day is different. The most interesting day, however, was when I was given the chance to photograph the announcement for the Nobel Prize in physics. Peter Higgs and François Englert were awarded on that day for the discovery of the Higgs particle.”

“Another important moment was the day I met Stephen Hawking,” she said, adding that when she was reading his work, she never could have imagined that she would meet him.

“I’ve thought about returning to Greece. I want to return under the condition that I will be able to live decently. There are more opportunities abroad. All the young people are leaving and I left with them. Greece’s conditions will keep worsening if this goes on much longer,” she noted.