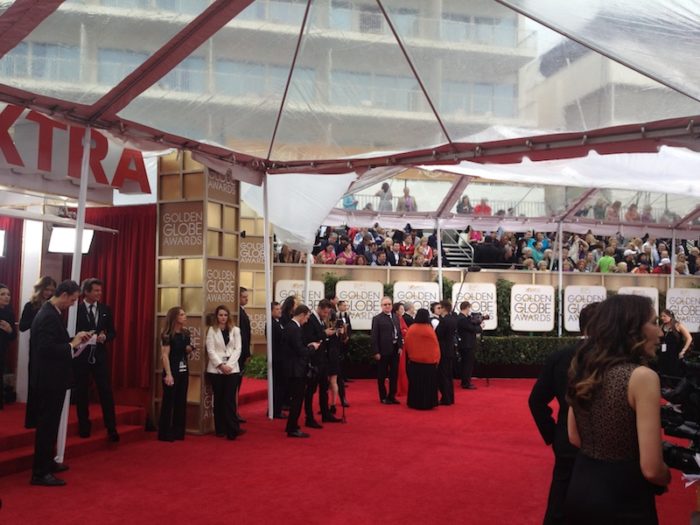 The 72nd Golden Globes awards ceremony tonight marks the start of Hollywood’s 2015 award season!    The 2015 Golden Globes are presented by the Hollywood Foreign Press Association, and hosted by comediennes Amy Poehler and the Greek-American Tina Fey.  The ceremony took place at the Beverly Hilton Hotel, and aired on NBC at 8 PM Eastern Time/5 PM Pacific.

A full list of this year’s Golden Globe winners is included below, as well as a record of the night’s events, presenters and awards. Though the Greek-American nominees for the evening, Jennifer Aniston and Alexandre Desplat, did not win, they and the rest of the nominees should still be commended for the amazing work they did this year in the film industry.  Congratulations to all the winners and nominees!

Best Animated Feature Film – How To Train Your Dragon 2

5:00 PM (PT): And we’re off! Tina Fey and Amy Poehler start off the night hilariously poking fun at the Sony scandal and “The Interview”.

5:05 PM (PT): The hosts have fun at the expense of George Clooney (this year’s Cecil B. DeMille award recipient), Joaquin Phoenix, Julia Louis-Dreyfuss, Jennifer Aniston, and a slew of other celebrities, and then go into a game of “Who Would You Rather?”.  Most people are probably playing along at home.

Best Supporting Actress in a Series, Miniseries, or TV Movie

5:22 PM (PT): After a brief commercial break, Jennifer Lopez and Jeremy Renner bring us back to the awards by presenting the award for:

Best Actor in a Miniseries or TV Movie

5:25 PM (PT): “Fargo” is already cleaning up pretty nicely, with a best TV movie or miniseries win, as well as a best actor win for Billy Bob Thornton.

5:27 PM (PT): Naomi Watts present a small trailer for “Birdman”, starring Michael Keaton and up for numerous awards this evening.

5:34 PM (PT): The HFPA President comes out and makes a speech about the freedom of journalistic expression.  He calls for people to unite behind the freedom of the press, especially in light of the Sony scandal and the recent Charlie Hebdo attacks.

5:36 PM (PT): Colin Firth gives a little background on the story of “The Imitation Game” before presenting a trailer of the nominated movie.

5:51 PM (PT): Surprise presenter Prince presents the award for Best Original Song to Common and John Legend for “Glory” in “Selma”.  Common talks about the horrible tragedy of the recent police shootings in New York and speaks for all those fighting injustice.

Best Supporting Actor in a Series, Mini-Series or TV Movie

6:04 PM (PT): Former host Ricky Gervais comes out and, as is his style, insults the entire audience by talking about their overprivileged status and all the illegal things they’ve probably done to get there.  He then presents the award for:

Best Actress in a Motion Picture, Musical or Comedy

6:18 PM (PT): Jared Leto gets up to present the Best Supporting Actress award, and also brings attention to the Charlie Hebdo attacks with “Je Suis Charlie”.

6:36 PM (PT): Another win for “Transparent”, with Jeffrey Tambor winning for Best Actor.  Jane Fonda and Lily Tomlin present him the award; Lily Tomlin makes a slight slip by saying Don Cheadle is in “House of Cards” instead of “House of Lies”, and Jane Fonda is ridiculously well-preserved for 77 years old.

Best Actress in a Miniseries or TV Movie

6:44 PM (PT): Maggie Gyllenhaal makes a great speech referring to the “wealth of roles for actual women” on film and TV today.

7:07 PM (PT): Julianna Margulies and Don Cheadle present the Cecil B. De Mille Lifetime Achievement Award to George Clooney.  And have a competition over who is a better friend of his.  George Clooney has been nominated for more Golden Globes in more categories than anyone in history, apparently.

7:10 PM (PT): The Golden Globes put together a wonderful montage of clips from George Clooney’s movies, TV shows, and humanitarian work in real life, before honoring him with the Cecil B. De Mille Award.

7:17 PM (PT): George Clooney gives a heartfelt speech thanking the people he’s worked with over the years, as well as his new wife, talking about how grateful he is to have found her.  He also references the million-person march in Paris today, ending his speech with “Je Suis Charlie”.

Claire Danes, Homeland
Viola Davis, How to Get Away With Murder
Julianna Margulies, The Good Wife
Ruth Wilson, The Affair (Winner)
Robin Wright, House of Cards

Best Actor in a Motion Picture, Comedy or Musical

7:54 PM (PT): Though the awards show has been moving quite fast, they’re running a little long, so the last few presenters are all speaking double time.

7:59 PM (PT): The legendary Meryl Streep gets up to present the last award of the evening, for Best Motion Picture, and says a farewell to Tina Fey and Amy Poehler, who will not be returning as hosts next year.

Boyhood (Winner)
Foxcatcher
The Imitation Game
Selma
The Theory of Everything

8:00 PM (PT): And we’re done! That’s the end of the ceremony.  Full awards list included in the introduction.