GRNews
GreekReporter.comSportsBasketballEuroleague Basketball: The Top-16 Groups of Olympiacos and Panathinaikos

Euroleague Basketball: The Top-16 Groups of Olympiacos and Panathinaikos 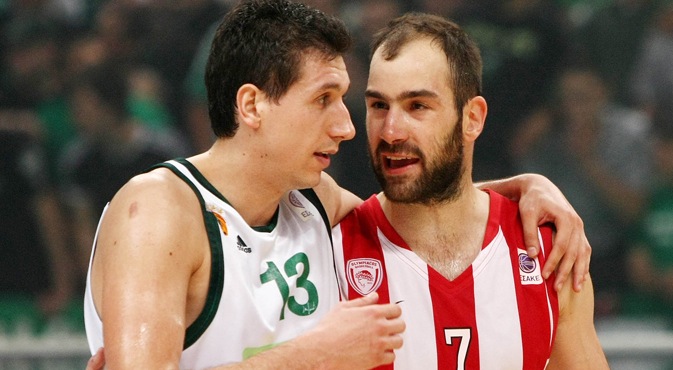 As the 2014-15 Turkish Airlines Euroleague preliminary group stages came to an end, Panathinaikos and Olympiacos prepare for the next chapter where they will be paired up with the tournament’s top-16 clubs in Europe.
Group D’s top finisher Olympiacos will cross paths with Russian sides CSSKA Moscow of Dimitrios Itoudis and the only undefeated team so far, as well as rookie Nizhny Novgorod. Turkish clubs Fernarbahce/Ulker of Zeliko Obradovic and Anatolu Efes of former Red coach Dusan Ivkovic, Laboral Kutxa and Malaga from Spain and Italian side Milano.
Greek Champions Panathinaikos will face Spanish giants and favorites to win the trophy, Real Madrid and Barcelona, 2014 Euroleague Champions Maccabi Tel Aviv, Zalgiris Kaunas lead by former Green player Sarunas Jasikevicius, Galatasaray from Turkey, Alba of Berlin and Red Star of Belgrade.
At first glance, Spanish basketball is dominating with four representatives but also the tremendous results of the Turkish Basketball Association now sending three teams to the top-16. Greece and Russia still hold strong with two teams while Italy, Lithuania, Serbia, Germany and Israel send one.
The next stage begins the upcoming week with teams aiming to finish within the first four spots that will take them to the final-8. Four groups of two teams will then be formed, with the first one to reach three wins, qualifying to the Euroleague Final Four in Madrid.