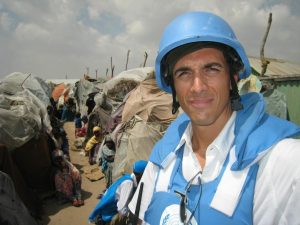 United Nations spokesman Ari Gaitanis arrived in West Africa this week, dispatched from his post in Afghanistan, to examine the situation of the first ever UN emergency health mission. “There are concerns that the steps implemented by the international community are not nearly enough to halt the advance of the fatal disease. With every day that passes, the number of sick people increases – the virus’ spread is either stopped now or we face an entirely unprecedented situation,” he told Greek-Australian newspaper Neos Kosmos.

People of Westren Africa have been left alone to deal with the Ebola virus for a long time now and witnessed the international community’s inadequate reflexes that mobilized only after the threat reached the news of Europe and USA. According to Gaitanis though, even now, UN’s reaction will give the frightened people of Africa the sense that the international world is listening to their calls for help. “When the UN turns up in a crisis zone, that says something to the people suffering there, that the world hasn’t forgotten them, that it stands by them and will do what it can to end that suffering,” he argued.

But the fight against Ebola is a tricky one. It is not just about getting those sick treated but also diagnosing new victims as quick as possible, and for that purpose more laboratories are needed in the outbreak’s surrounding countries. “There is a need for an increase in the number of diagnostic laboratories, transport support and funding to help with operation logistics which would help aid the UN response to this crisis,” Gaitanis added.