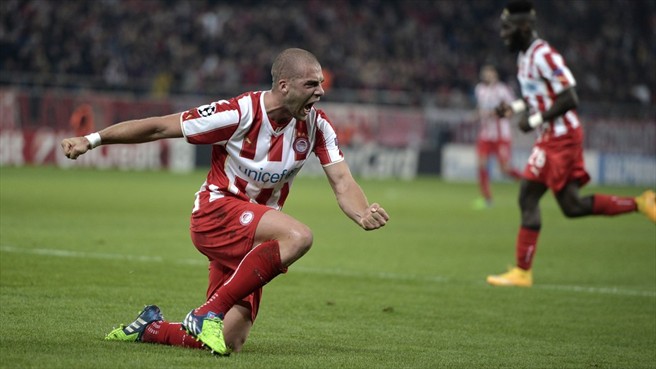 The Greek champions, Olympiacos, defeated Malmo with two late goals to qualify to the Europa League’s final 32. Mitroglou, Dominguez, Fuster and Afellay scored for the reds.
At the same time, their Champions League journey has ended after Juventus drew to Atletico Madrid 0-0. La Vecchia Signora finished a point ahead of Olympiacos while Atletico finished at the top of the group and subsequently the first two spots that lead to the final 16.
The crisis within which Olympiacos has fallen into during the last few games (losses to PAOK and Atletico and a tie to Giannina) was apparent from the minute Michel’s players stepped onto the field. It didn’t take long for them to put it all behind though and focus on tonight’s game. The face of the reds’ offense, Chori Dominguez, was on fire but his smart passes all went to waste as Fuster, Kasami and Botia couldn’t find the target.
It was at the game’s 22nd minute when Mazuaku brought the ball in the box, Pajtim Kasami assisted with a headed pass before David Fuster, with a header from very close range, scored Olympiacos’ first of the night (1-0).
https://www.youtube.com/watch?v=aqd-cteY28Y
The home team continued to dominate with Dominguez, Fuster and N’dinga while Malmo was sitting back, waiting for a chance to counter attack. Which is exactly what happened in the 14th minute of the second half, when after an Olympiacos corner, Forsberg broke fast out of the defense and ran the field before eventually finding Kroon’s left foot who aimed at Roberto’s bottom right corner and equalized for the Swedes (1-1).
https://www.youtube.com/watch?v=Xlt3bpvdd5w
Even though their defense was unorganized, Olympiacos deserved to lead the score and four minutes later, Dominguez fired a cracker from outside the 19-yard line to rest the ball in the net (2-1).
https://www.youtube.com/watch?v=DKjUVob0DL4
The Greek champions seemed capable of preserving their one goal lead since Malmo showed no signs of crossing the half line. Against all expectations however, ten minutes before the final whistle, Anton Tinnerholm assisted Markus Rosenberg with a right cross, who with a left footed shot from the center of the box, equalized again (2-2).
https://www.youtube.com/watch?v=EYm8xi6Xm1k
One more Malmo goal, meant that Olympiacos’ hopes of participating in any European contest would be diminished, so Michel decided to call Benitez from the bench and sub Mitroglou out, who, once again today, was unable to find the net. A minute before the substitution was made though, the Greek striker brought the fans to their feet with his first goal in ages after Dominguez found him with a nicely curved corner kick (3-2).
https://www.youtube.com/watch?v=Qwz6IJ9Nwv4
And then in stoppage time, Kasami, following a fast break, closed the night in ecstasy, dribbling through every opponent in his path before passing it perfectly to Afellay, whose only job was to tap it in the net (4-2). Olympiacos’ fourth of the night ended their Champions League run in celebration and brought the lost confidence back to players, fans and coach, much needed in order to get back on their feet.
http://www.dailymotion.com/video/x2c6vra_goal-afellay-olympiakos-4-2-malmo_sport
(Olympiacos) Roberto, Elabdellaoui, Botía, Abidal, Masuaku, Ndinga, Fuster (Afellay – 77′ ), Domínguez (Siovas – 90′ ), Maniatis, Kasami, Mitroglou (Benítez – 88′ )
(Malmo) Olsen, Ferreira da Silva, Halsti, Helander, Konate, (Kroon – 57′ ), Tinnerholm, Eriksson (Thern – 75′ ), Kofi Adu, Forsberg, Rosenberg, Thelin (Cibicki – 80′ )