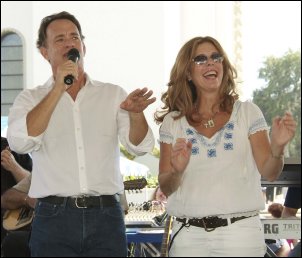 Rita Wilson and Tom Hanks took a break from their busy acting schedule yesterday to host the National Christmas Tree lighting ceremony, together with President Obama and his family. The ceremony took place at 4:30 PM in President’s Park, near the White House.

The famous couple, known for its strong ties to the Greek-American community, also introduced the musicians for the evening. Ne-Yo, Steve Miller, Patti LaBelle, Chely Wright and Fifth Harmony, among others, sang a medley of holiday tunes to get the audience into the Christmas spirit.

The tree lighting ceremony is an annual tradition in Washington, D.C., since 1923. It features a giant Christmas tree, lit up with over 60,000 bulbs, along with 56 smaller trees to represent the American states and territories. This year, the designs for the smaller trees were programmed by girls across the US who took part in Google’s Made With Code project. The program, meant to inspire girls to enter the field of computer science, sponsored this year’s tree lighting event.

The Hollywood power couple will soon be back in theaters nationwide. Wilson has been working on numerous film projects and can be seen in the upcoming films “Kiss Me,” “Brother In Laws” and “Facing the Wind,” while Hanks will be starring in “Ithaca,” “The Lost Symbol” and “A Hologram for the King.”