GRNews
GreekReporter.comGreek NewsCyprusUN Special Adviser on Cyprus: Both Sides Should Return to Negotiations

UN Special Adviser on Cyprus: Both Sides Should Return to Negotiations 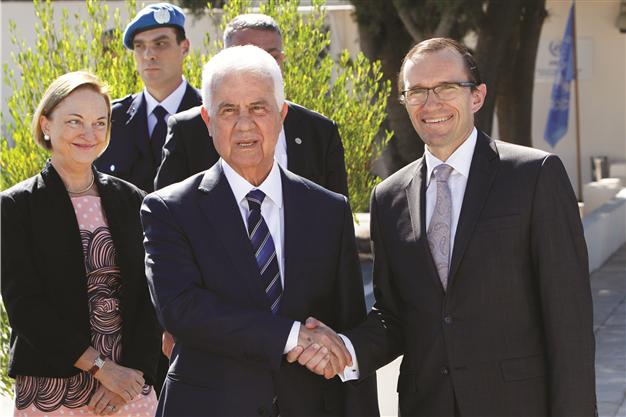 United Nations Special Adviser on Cyprus Espen Barth Eide said that, currently, the “Plan A” for the solution to the Cyprus problem is to have the Greek-Cypriot and the Turkish-Cypriot sides back to the negotiating table in order to have a positive outcome as soon as possible.

Exiting a meeting with Turkish-Cypriot leader Dervis Eroglu in the occupied part of the island, Eide repeated that he understands and respects that his proposal for a twin track process to discuss hydrocarbons parallel to the talks has not been welcomed by either side, adding that he had been listening to both sides’ views on how the negotiations can restart. “I don’t know when the negotiations will resume but when the talks do resume, we must move fast,” the Norwegian official underlined.

Sending a message to both sides, Eide said that it is time to make some decisions, as the Cyprus problem and the uncertainty as a result of it had been going for way too long and they need to make an effort to return to negotiations. “The UN has no enforcement mechanisms to draw anyone to a meeting,” he said, according to Cyprus News Agency, while asked whether there is a chance of resuming the talks before the Turkish-Cypriot elections, scheduled for April 2015, he appeared optimistic, but not certain.

On his behalf, Eroglu said that his meeting with the UN representative was fruitful, adding that his side is ready to resume the negotiations. “Since it was the Greek-Cypriots who left the negotiating table, we believe there will be a great benefit for Mr. Anastasiades to return to the table without any preconditions. As I informed Mr. Eide, my team and I are still sitting at the negotiating table. The important thing is for Mr. Anastasiades to regain his health and return to the table,” he underlined, referring to the Cypriot President’s upcoming heart surgery, which will be performed in New York in December. In addition, Eroglu wished him a speedy recovery.

Eide will be in Cyprus until tomorrow, while he already held meetings with both sides’ representatives, as well as Chrysostomos II, Archbishop of Nova Justiniana and All Cyprus.