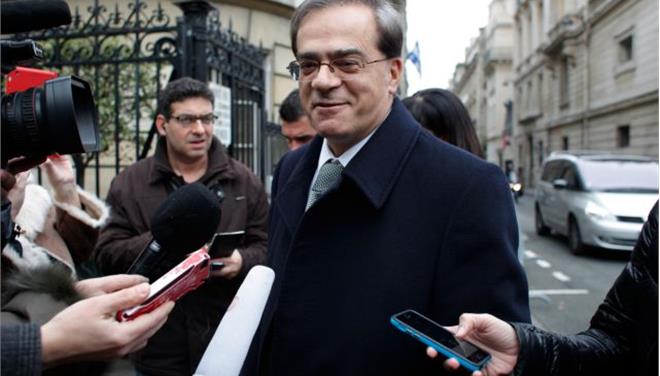 After two days of marathon negotiations in Paris, Greece and its international lenders have failed to reach a deal regarding the country’s austerity and reform program, while Greece is approaching the deadline to strike a new financing deal with its creditors. As both sides commented after the 24-hour non-stop negotiations, some progress has been made, although the significant differences between the two sides remain unsolved, while Greek officials insisted that they disagree with the country’s 2015 budget target.
According to the Wall Street Journal, a Greek official said that “the timetable is very tight. This review is unusual, since it’s the last one.” On his behalf, according to the same source, European Commission representative Declan Costello underlined that “had very intensive and constructive talks during the last two days; we will continue our dialogue intensively.” Costello, though, declined to answer questions regarding the time and place the talks would resume.
Greece’s coalition government has set a goal of exiting the bailout program, or at least decrease the degree of control by its lenders, at the end of the year, some 18 months earlier than scheduled. Despite Athens’ plans, that would require an agreement with the country’s Eurozone partners and the International Monetary Fund before the critical Eurogroup of December 8, which will table the possibility of activating a contingent credit line in order to prevent the country for slipping into recession again.
The talks between Greece and its creditors will now be transferred from Paris to Brussels, where the Secretary General of the Greek Finance Ministry, Anastasios Anastasatos, will attend a meeting with Eurozone officials, reviewing the latest negotiations over the country’s bailout program and set the agenda for December’s Eurogroup meeting.
Last week, the Greek government submitted its 2015 budget to the parliament without the approval of its lenders, who are requesting to make some additional cutbacks of 1.8 to 3.5 billion euros from unpopular reforms which the Greek side wants to avoid ahead of February’s presidential election.
The Greek government was represented in Paris by Finance Minister Gikas Hardouvelis, Deputy Ministers Christos Staikouras and Giorgos Mavraganis, Secretary General Anastasatos, Labor Minister Giannis Vroutsis, Administrative Reform Minister Kyriakos Mitsotakis, PASOK representative Christos Protopapas and Prime Minister Antonis Samaras’ consultants Chrisanthos Lazaridis and Stavros Papastavros.
Emergency meeting between Samaras-Venizelos
Samaras has scheduled an emergency meeting with government Vice President and Foreign Minister Evangelos Venizelos at 10 am tomorrow. The two government partners are expected to discuss the negotiation results.