Ship with 700 Immigrants Adrift off Crete 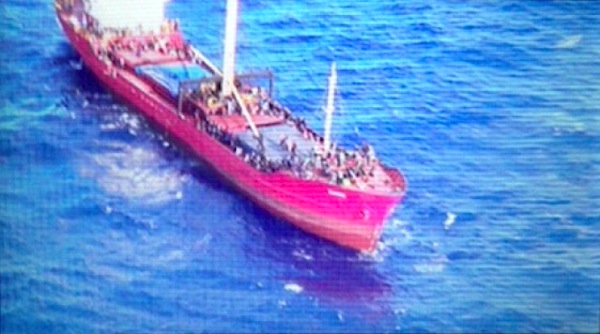 A cargo ship carrying some 700 immigrants from various countries sails ungoverned 30 nautical miles southeast of Crete, Greece. M/V “Baris,” which is bearing a Kiribati flag (a small Pacific Ocean island nation), is sailing adrift after a mechanical problem. Other ships and a frigate of the Hellenic Navy have reached “Baris” in an attempt to rescue its passengers but the operation is very difficult due to heavy weather, as the wind blows with an intensity of seven to eight Beaufort.

According to a Hellenic Coast Guard press release, the 77-meter-long cargo has been approached – apart from the frigate – by three merchant ships that are ready to evacuate the vessel if necessary, while the Greek authorities are examining the possibility of towing it to safety. A Hellenic Air Force Super Puma helicopter also takes part in the ongoing operation.

The port of departure as well as the exact destination and the nationalities of those on board remain unknown and will only be revealed after the rescue operation is complete. According to Greek media, there is a large number of women and children aboard “Baris,” although their health condition can not yet be confirmed.

As local media reported, the frigate’s commander, in cooperation with the competent authorities, seeing that there has not been an inflow of water in the ship and the passengers’ life is not at risk, decided that the best solution is towing the vessel to the nearest safe port or coast.

Furthermore, the Greek island’s health services have been set in a state of emergency in order to nurse the passengers as soon as they reach the coast. Although, as long as their nationality remains unknown, none of them will disembark the ship unless their medical examination is complete. The secretary general of the Public Order Ministry, Serafeim Tsokas, has also arrived in Crete, as he will be in charge of the immigrants’ rescue and accommodation operation.

Every year, tens of thousands of refugees, including many from war-torn Syria and Libya, enter Europe illegally, after paying high prices to organized smuggling gangs to ferry them across the Mediterranean from northern Africa or Turkey to Italy and Greece.