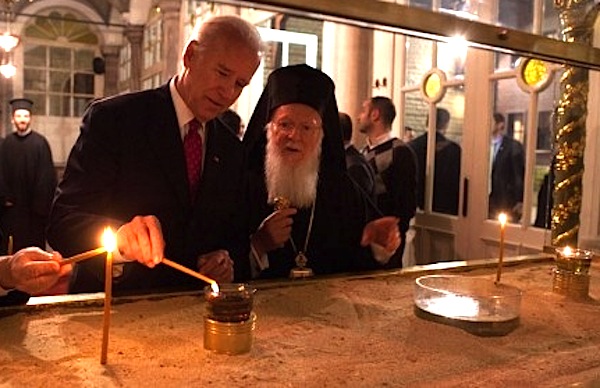 U.S. Vice President Joe Biden paid a visit to Greek Orthodox Patriarch Bartholomew I on November 23, as part of his official trip to Turkey.

Biden and his wife Jill visited the Orthodox Patriarchate in Istanbul’s historic Fener district, where they were greeted by Patriarch Bartholomew I.

While only a small group of journalists were invited inside the Patriarchate, Biden and Bartholomew held a private meeting.

Bartholomew accompanied the Bidens during their visit to the Greek Orthodox Church of St. George, located inside the premises of the Patriarchate, where they lit a candle together.

High security measures were taken before the Bidens’ visit to the Patriarchate, which lasted about one-and-a-half hours.

The U.S. Vice President arrived in Istanbul late Friday for official talks with Turkey’s top political figures amid difference of views over the crisis in Syria.