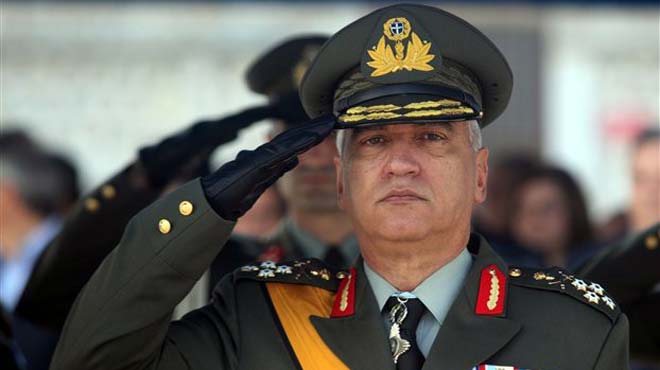 The Chief, Hellenic National Defense General Staff (HNDGS), since November 2011, General Mikhail Kostarakos, was elected for a three-year term at the highest European Union military body (EUMC) on Thursday. Kostarakos was appointed to his new position by the Chiefs of the Member States of the European Union Armed Forces in a vote held in Brussels, as part of the Conference of EU’s Military Committee. The Greek General will assume his new duties later this month and those will be added to the notice of the General Staff.
According to sources close to the Greek Ministry of National Defense, Kostarakos was considered a clear favorite in the election, while the other candidates running for the position were a Spanish Admiral and a Finnish Lieutenant General. Earlier this year, he had also applied for the presidency of NATO’s Military Committee, without being elected.
Kostarakos’ appointment as the head of the EUMC was welcomed by the Greek Minister of National Defense, Nikos Dendias, who in his statement underlined that “his success is also the success of Greece and our Armed Forces.” In addition, Dendias expressed his confidence over Kostarakos’ success in his new position, in which he will work productively and efficiently “for the construction of a new strategy for the Common Security and Defense Policy of the European Union towards a truly united Europe” from the first day he will take over his duties.
Kostarakos was born in Thessaloniki in 1956 but originates from Mani, Peloponnese, and after he graduated from the Experimental School of the University of Thessaloniki he was admitted to Evelpidon Military Academy, from which he was commissioned as a second lieutenant in the Artillery, four years later, in 1978. He holds a Political Science degree from the Law Faculty of the University of Athens and an MsC in “Diplomatic and Strategic Studies.” He was promoted to General in 2011.
EUMC is the highest military body set up within the Council. It directs all EU military activities and provides the Political and Security Committee (PSC) with advice and recommendations on military matters. EUMC is composed of the Member States’ Chiefs of Defence (CHOD), who are regularly represented by their permanent Military Representatives (MilReps). EUMC has a permanent Chairman, selected by CHOD and appointed by the Council.