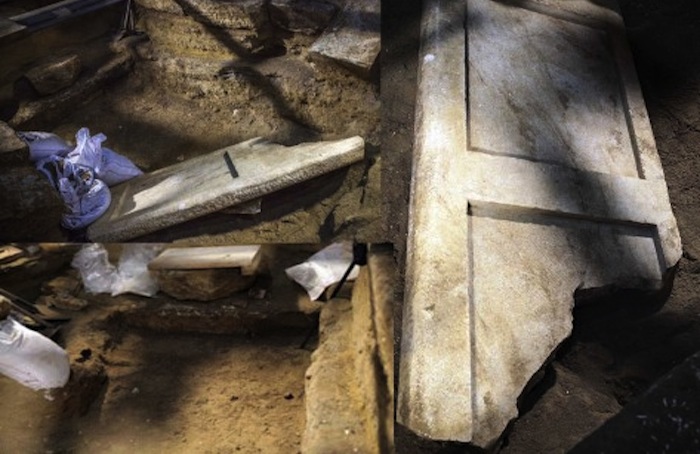 In an effort to reach the fourth chamber in the Amphipolis tomb, the excavation crew reached an 8.4 square meter vault and found an almost intact marble door weighing 1.5 tons.
According to an official announcement by the Greek Ministry of Culture, the removal of the backfilling earth from the fourth chamber exposed a vault dug on the natural slate floor. The vault has a surface of 4X2.10 meters and its floor is sealed with limestone. In addition, a marble door that belongs to the third chamber with dimensions 2X0.90X0.15 meters, weighing 1.5 tons, was found with only a small part missing.
Parts of the limestone remain intact and are connected to the side walls. On the west part of the floor, there is an incline caused by the floor caving in. On the east part, the limestone is in place. The stones from the west wall will be removed to facilitate supporting and bracing works.
The report describes the vault as filled with soil, like the rest of the monument, and the removal of soil has led to a depth of 1.40 meters so far and it looks like it goes much deeper. The second door was found inside the soil. The removal of soil is continuing uninterrupted.
Meanwhile, sensors that measure distortion have been put in order to measure the sturdiness of the supporting mechanisms during excavation and supporting works. Support beams have been placed on walls, as well as on the domes of the second and third chamber.