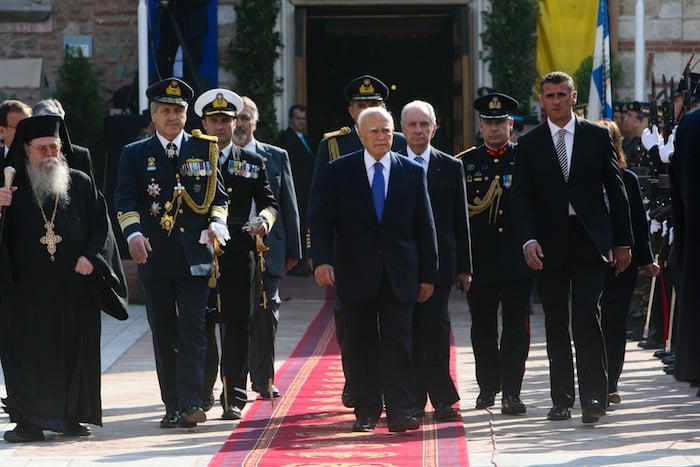 Greek President Karolos Papoulias will arrive on Monday afternoon in Thessaloniki, Greece, to attend the celebrations of the October 28 national holiday (Ohi Day).
Papoulias is expected to meet with Macedonia-Thrace Minister Giorgos Orfanos on Monday at 6:40 p.m.
On Tuesday at 10:30 a.m., he will lay a wreath at the monument of the 3rd Army Corps and at 11 he will attend a military parade that will take place along the seaside on Alexander the Great avenue, at which the government will be represented by Defense Minister Dimitris Avramopoulos. The city’s school parade will take place at 11 a.m. on Monday morning at Tsimiski street. Orfanos will represent the government at the event.
At 11 a.m. on Sunday morning, a religious service will take place at Agios Dimitrios church, on the triple celebration of the national “Ohi” anniversary, the liberation of Thessaloniki and its patron Saint Demetrios. The government will be represented by Orfanos.
A festive event will also be held at the Aristotle University at 6:30 p.m. on Sunday evening.
(source: ana-mpa)