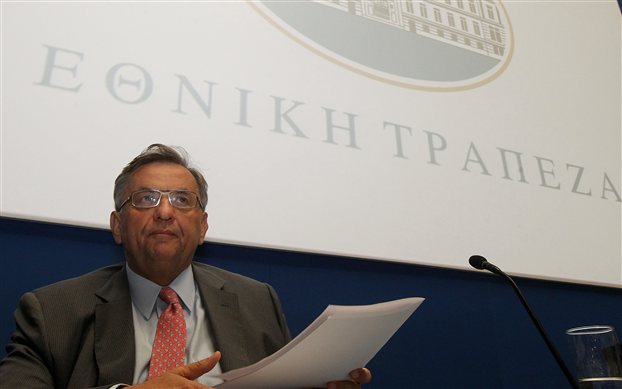 Speaking at a conference of the Greek Institute of Internal Auditions on “Internal control in the middle of developments,” National Bank of Greece (NBG) CEO Alexandros Tourkolias revealed that most of the bank’s loans are investment loans, spent over the creation of new working positions. NBG, he added, prioritizes the support of real economy combined with a plan for its restructure, which is still in papers and soon will be realized.

“National Bank of Greece has strong liquidity,” Tourkolias declared, adding that “with the existing figures, we can sleep soundly,” sending a message for the bank’s capital adequacy, just a few days ahead of the results of Greek banks’ stress tests by the European Central Bank (ECB). The NBG CEO said that the bank’s new business model will be in accordance with the country’s development model and will be based on extroversion, support for new technologies and human resources, leaving extreme internal consumption that was followed during the pro-crisis period in the past. In addition, Tourkolias declared that loans will be smaller, while on the contrary, the companies’ involvement in their investment plans bigger, in order to be sustainable and enjoy greater yields.

Regarding NBG’s internal control over time, he underlined that it is the compass for its activity and said that Greek banks have developed an advanced system of internal control that is continuously adjusted to new requirements. As for the new European supervisory to be put in place, he said that it will be suffocating and diverse, requiring immediate response to those controlled, while both the domestic and European system will be put under test, as it will experience vibrations. “At National Bank we are properly prepared and stand ready, having inter alia, strengthened internal audits and given clear instructions,” he concluded.

Citing Efe News Service, Bloomberg reported that three Greek banks will be amongst those that will fail the stress tests – the results of which will be published this coming Sunday – spreading discomfort on the Greek side. Based on anonymous sources, the report said that apart from the three Greek banks, three Italian, two Austrian, one Cypriot, one Portuguese and one Belgian are going to fail the stress tests as well.

As Bloomberg underlined, the facts can still be revised as they are preliminary, adding that all Spanish banks will pass the stress tests.

Efe News Service’s report comes to a complete contrast with all previous reports on the issue.