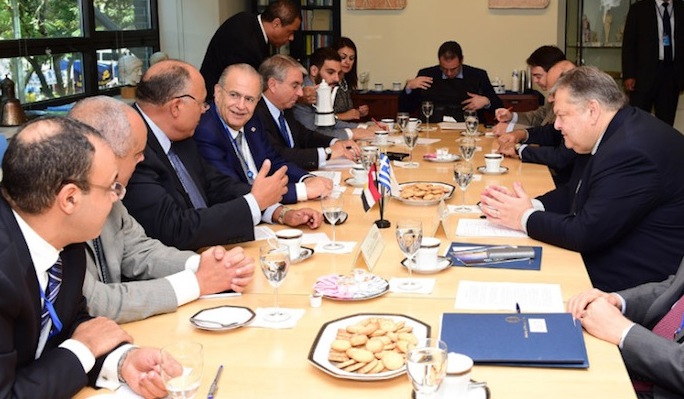 Greece, Egypt and Cyprus have expressed their commitment to work closely and strengthen their cooperation in areas of mutual benefit, following a trilateral meeting the Foreign Ministers Evangelos Venizelos, Sameh Shoukry and Ioannis Kasoulides had in New York, on the sidelines of the UN General Assembly.
It was the second such meeting the ministers had, according to a joint statement issued on Sunday.
It set out joint assessments of the three governments on regional issues, such as Palestine, Syria, Iraq and Libya and the dangers of terrorism. It also provides political support to Egypt, includes the positions of Cyprus government on Cyprus issue and supports the Greek positions on the issue of illegal immigration.
It reaffirms the intention of the three countries to promote the cooperation of the neighboring countries of the Eastern Mediterranean in various issues, as well as in energy.
The three Ministers had the opportunity to review developments in the region and to underline the importance of the Eastern Mediterranean becoming a pillar of stability in the wider area, by promoting cooperation among neighboring countries, including in the energy field.
The Ministers expressed their satisfaction regarding the ongoing trilateral political consultations between their countries covering a multitude of bilateral and regional issues of common interest and declared the commitment of their respective governments to work closely together and to enhance their cooperation in all fields of mutual benefit.
They reaffirmed their support to the government and the people of Egypt in their quest for a prosperous and democratic country and they expressed strong solidarity with the people and the government of Egypt in their fight against terrorism.
On the issue of Cyprus, they reaffirmed their support to the ongoing efforts for reaching a solution on the basis of relevant United Nations Security Council Resolutions, which would be beneficial for all Cypriots and the whole region. They welcomed and expressed their satisfaction for the appointment by the Secretary General of Espen Barth Eide as his Special Advisor on Cyprus. They also expressed their strong support to efforts to implement confidence building measures that will provide a dynamic impetus to the prospect of a united Cyprus.
(source: CNA)