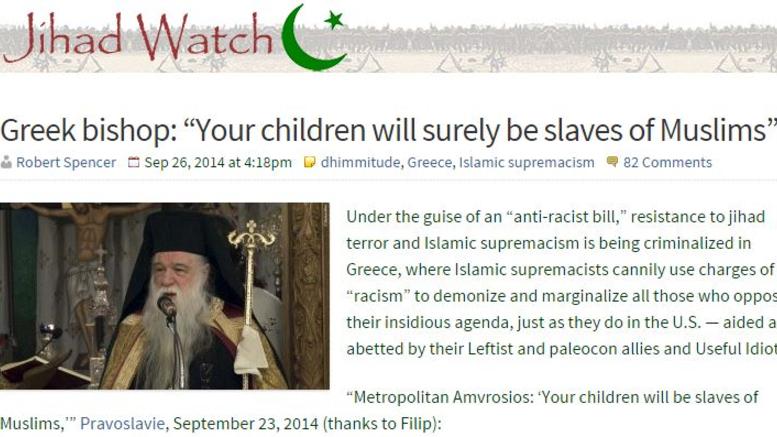 Resistance to jihad terror and Islamic supremacism is being criminalized in Greece, claims the website Jihadwatch.org.
According to the site, which quotes the sermon of a prominent Greek bishop, Islamic supremacists cannily use charges of “racism” to demonize and marginalize all those who oppose their insidious agenda.
Metropolitan Amvrosios of Kalavrya has spoken out adamantly against the anti-racism laws recently passed in Greece. “With the new law into effect, those who speak of the motherland and patriotism will risk jail,” he says.
“A priest who will speak up against Jehovah’s Witnesses and other religions from the ambo, may be declared a racist and imprisoned,” said the hierarch.
“Soon we will become aliens in our own home country. I do not know whether I will live to see these times, but your children will surely be slaves of Muslims. Greece is disappearing, faith is disappearing… Keep the flame of the motherland and faith. Globalization is not knocking at our doors any more – it has already entered our homes,” he added.