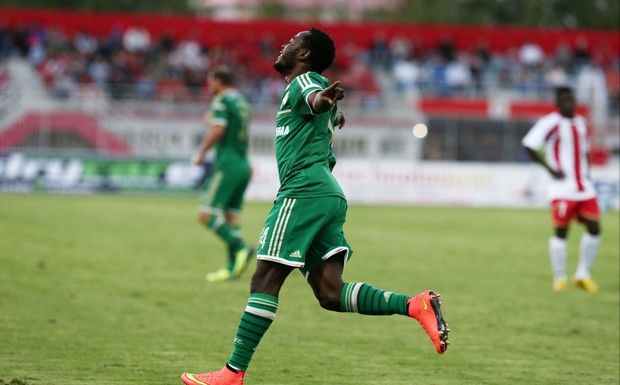 The Greek Cup started yesterday with Olympiacos’ controversial victory over Panachaiki in Patras (0-1) and continued today with AEK Athens grabbing a point (0-0) in Komotini against Panthrakikos while Panathinaikos beat Olympiacos Volou in the homonymous city 0-1 with a goal from Abdul Ajagun. Let’s take a moment to review all the games.
Group 1
Olympiacos took the lead with Kargas’ own goal in the 75th minute and kept it till the end of the game to secure its first three points while Panionios and Fostiras ended their clash in a goalless draw.
1. Olympiacos 3
2. Panionios 1
3. Fostiras 1
4. Panachaiki 0
https://www.youtube.com/watch?v=nV7_zgf9zxs
Group 2
The games are scheduled for tomorrow.
1. PAOK
2. Kerkyra
3. Apollon 1926
4. PAS Giannina
Group 3
SKODA Xanthi struggled but in the end scored the crucial goal with Antonis Renos, eight minutes before the end of the game against winless (in the championship) Niki Volou. On the other hand, OFI failed to beat lower division Zakynthos in front of 3.500 fans, walking away with a 1-1 draw.
1. SKODA Xanthi 3
2. OFI 1
3. Zakynthos 1
4. Niki Volou 0
Group 4
Platanias, from the city of Chania in Crete, defeated Ethnikos Serron 3-1 in front of its home crowd with goals from Milounovits, Nazlidis and Zaradoukas. As far as the group’s second game, Iraklis tried to sustain its lead but Levadiakos came back with a late goal, pinching a point in the Kaftatzoglio stadium.
1. Platanias 3
2. Iraklis 1
3. Levadiakos 1
4. Ethnikos Serron 0

Group 5
Yesterday, Atromitos got a professional win over weaker side Iraklis Psahnon, while today AEK Athens tied Panthrakikos 0-0 even though they played better and deserved more than just a point.
1. Atromitos 3
2. AEK Athens 1
3. Panthrakikos 1
4. Iraklis Psahnon 0
https://www.youtube.com/watch?v=L31GsouYGFs
https://www.youtube.com/watch?v=K-Wn649HKRQ
Group 6
Veria stood up in the most glorious way after its 3-0 loss from Olympiacos on Saturday for the Greek league by beating Ermionida 4-1 in the capital of the Imathia region. In a hearty game at the Rizoupoli ground, Ergotelis equalized with Vlachodimos in stoppage time to snatch a 2-2 draw over Apollon Smyrnis.
1. Veria 3
2. Ergotelis 1
3. Apollon Smyrnis 1
4. Ermionida 0
Group 7
After the great results in Europe and the Greek championship, Asteras Tripolis continued with a 4-1 win over Eginiakos for the Greek cup. In the other game, Tyrnavos left with a point from the island of Lesvos against Kalloni (1-1).
1. Asteras Tripolis 3
2. Kalloni 1
3. Tyrnavos 1
4. Eginiakos 0
https://www.youtube.com/watch?v=BVp8jDFzj6A&list=UU2UiYz2aisu79UuM-fwcyUw
Group 8
For the final group, Panathinaikos found it hard against the mighty Olympiacos Volou but ultimately scored with Ajagun (0-1) to pocket their first three points. Chania and Panetolikos are scheduled to play tomorrow.
1. Panathinaikos 3
2. Chania 0
3. Panetolikos 0
4. Olympiacos Volou 0
https://www.youtube.com/watch?v=mbPFV4iN2pQ&list=UU2UiYz2aisu79UuM-fwcyUw