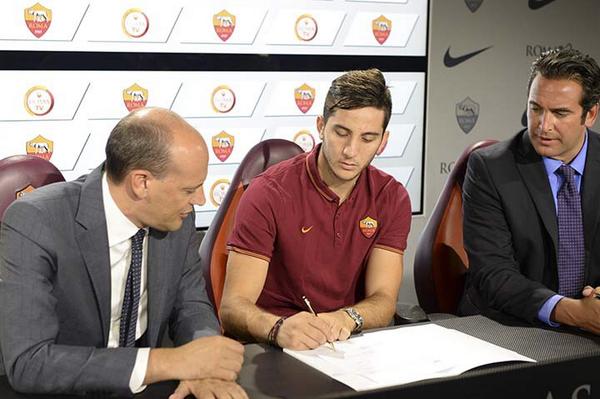 Kostas Manolas signed for AC Roma, a week before the end of the summer’s transfer window to replace Mehdi Benatia who moves to Bayern Munich. Olympiacos, the young player’s club till yesterday, will bank in €13m from the deal with a bonus of €2m if the defender manages to participate in a number of agreed games.
Kostas Manolas, who started his career in Panaxiakos, the local team of the Cycladic island Naxos, Greece, is the nephew of Stelios Manolas who captained AEK Athens for more than 10 years and who’s dubbed as one of Greece’s most exquisite defenders of all time.
The 23-year-old will be paid €7m over the five years of stay in the city of Rome. Italian rivals Napoli and Juventus, but also Arsenal chased after Manolas throughout the summer transfer season, but it was AC Roma that showed real determination to get the Greek’s signature.
“I want to thank the owner, Mr Marinakis, for respecting my choice of moving to AC Roma instead of joining a team that might had brought in more money for the club. I also want to thank Olympiacos’ fans who made me feel part of the team from the very beginning and I promise that our paths will cross again,” said Kostas Manolas as soon as the transfer became official.
This is the second most expensive transfer for a Greek, after Kostas Mitroglou signed for FC Fulham in January for €14.5, it is however the third time within the year that FC Olympiacos sells a player for over €10m (Andreas Samaris is the third).