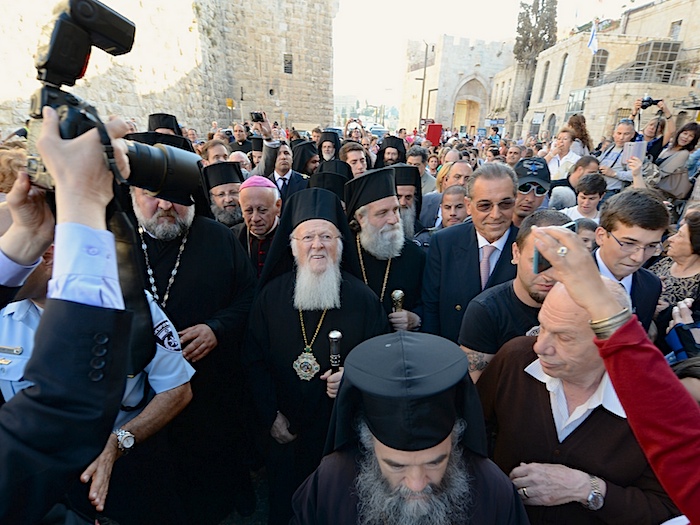 By Pat McCarthy* and Dan Woodin**

BETHLEHEM/JERUSALEM (ANS) — A snapshot of the Holy Land’s Christian population was revealed after Pope Francis’ and Ecumenical Patriarch Bartholomew’s joint visit to Jordan and the West Bank last spring.

It is fascinating to note that Christians in the Holy land constitute a mosaic of communities, according to the Vatican’s official website for the pilgrimage.

The rooted Christians of the Holy Land are for the most part Arabic-speaking and live integrated within the Palestinian and Jordanian Arab society.

However, an increasing number of Christians of diverse origins also live within the Jewish Israeli, Hebrew-speaking society.

An important group of Christians are long-term resident expatriates, many of whom serve in Church structures, religious orders and institutions.

There are 13 official Churches in the Holy Land that meet together regularly in order to coordinate their efforts in favor of the Holy Land’s Christians.

These are the Greek, Armenian, Coptic, Ethiopian and Syrian Orthodox; the Latin (Roman), Greek, Maronite, Syrian and Armenian Catholics, including the Franciscan Custody of the Holy Land; and the Lutherans and Anglicans.

In addition to these, there is also a variety of Evangelical groups.

The website says Christians number between 2 and 3 percent of the total population of the Holy Land today — a major decrease in their proportion since 1948, when they made up more than 10 percent.

In the state of Israel there are:

In the Palestinian Autonomy (and East Jerusalem) there are:

In the Hashemite Kingdom of Jordan there are:

Messianic leader, Daniel Rozen, blows the shofar at the Western Wall in Jerusalem.

Political and economic conditions have led to large-scale emigration of Christians from the Holy Land, so that only about 20 percent of Christian Palestinians remain in their historic homeland today.

“Emigration continues as Christians see that the peace process is blocked, the Israeli occupation continues, radical Islamic movements prosper, and the economic and social situation continues to worsen,” notes the Pope’s website.

**Dan Wooding is an award-winning journalist and the founder and international director of ASSIST (Aid to Special Saints in Strategic Times) and the ASSIST News Service (ANS), and hosts the weekly “Front Page Radio” show on the KWVE Radio Network in Southern California, which is also carried throughout the United States and around the world. He is the author of some 45 books, the latest of which is a novel about the life of Jesus through the eyes of his mother called “Mary: My Story from Bethlehem to Calvary”.