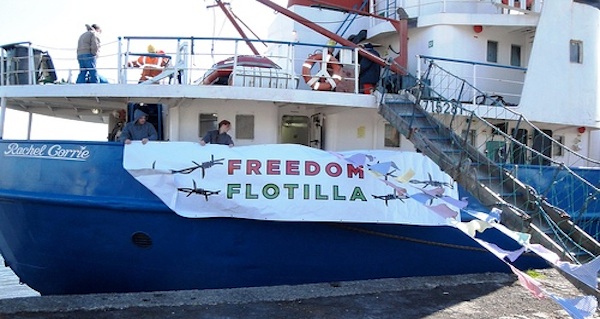 A coalition of activists said on Tuesday they would send a flotilla of ships to break Israel’s siege of Gaza by the end of 2014, four years after a similar campaign ended in a deadly raid by Israeli commandos.

The statement was made at a joint conference hosted by Turkish Humanitarian Relief Foundation (IHH), which sponsored the first flotilla of ships carrying aid to Gaza that was raided by Israeli commandos in 2010.

The group did not give a specific date or an estimate on how many vessels or people would participate.

IHH, which many believe has close ties to the Turkish government, is one of the coalition members, which includes groups from Greece, Norway and Sweden.

“We plan to send the flotilla during 2014,” the Freedom Flotilla Coalition, which includes activists from at least 10 countries, said in Istanbul.

“It is a reflection of the growing worldwide solidarity with the Palestinian people, from the US to Malaysia, from Scandinavia to South Africa,” they added.

The boats will sail at the same time from different ports around the world, carrying humanitarian aid as well as Palestinian commercial products.

The coalition will not seek support from any government and there will not be any military escort.

Israel says it imposed its blockade on Gaza in 2007 to prevent weapons from reaching Hamas, the Islamic militant group that rules Gaza.

“We will commit ourselves to non-violence, but as long as the blockade is there, we will sail again and again,” the group said.

In 2010, Israeli commandos stormed the Turkish-flagged Mavi Marmara, the largest ship in a flotilla dispatched by IHH, when nine Turks died in the raid.

Conquests of Alexander the Great Left Traces in Modern Cuisine