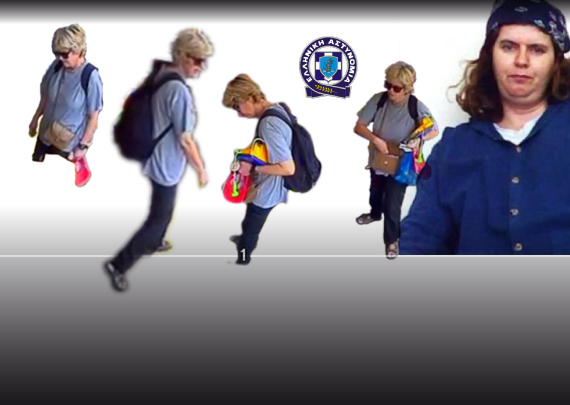 Four photos of Paula Roupa, partner of terrorist Nikos Maziotis, were given to the public yesterday afternoon. The 45-year-old woman looks very different now. She has short blond hair and she is much thinner.
The photos are only a few days old, as they were taken by a retail store surveillance camera during the weekend of July 12-13, at a Marousi area store.
Paula Roupa had been the target of police search long before Nikos Maziotis. Now police are trying to locate the woman and the child as well as the parking space where the silver car the couple used is parked.
Police also search for other individuals who they believe to be accomplices in the so-called “Maziotis group,” which, according to the authorities, is responsible for a number of armed robberies throughout Greece.
Authorities estimate that criminal offenders who had previously given weapons to the organization of suspected terrorist Nikos Maziotis, Revolutionary Struggle, are behind the efforts to cover and hide Paula Roupa, the partner of Nikos Maziotis.
Analysts of the counter-terrorist unit are confident that the lieutenant of Revolutionary Struggle, Giorgos Petrakakos, who has been missing for four years, is together with Roupa. “The fact that Petrakakos lives as an outlaw over these years makes us believe that he has connections with criminal offenders who will help both him and Roupa remain in the dark,” says an officer of Hellenic Police adding that “our first goal is to find out their hideout which contains the weapons and explosives and the garage with the cars and motorcycles of the organization so that we can disarm the members.”
According to information, the counter-terrorist unit cannot clarify whether the team of Vasilis Palaiokostas, with whom Petrakakos has a very good relationship, is involved in the coverage and escape of Roupa and seven members of the Revolutionary Struggle.