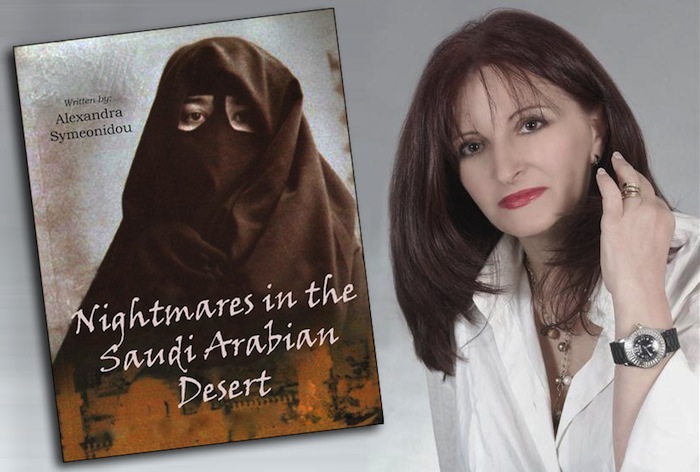 It was in the 80’s when a beautiful young Greek girl decided not to lead an ordinary life. She was in France studying in college, when she had to make a choice for her career that apparently would change her life forever. She was offered a job at the European Commission in Luxembourg, and a second, rather unusual but undoubtably much more tempting job, as a stewardess at Saudi Airlines.
She liked suspense and therefore decided to work for Saudi Airlines. After a year-long experience where she had the chance to meet many interesting people and visit the best places around the globe, she met a handsome young pilot.
She fell in love and was flattered by his noble past. There was just one problem: she was Christian and he was a Muslim; she was Greek and he was Arab…
But, as they say, love can cross over mountains and surpass the greatest difficulties.
The young pilot was from a royal Saudi family. He received a special permission from his family – a privilege that only 4% of the population has – to marry his beautiful Athenian bride…
If all that sounds like a fairytale to you, well I can assure you that if you were with me at this beautiful apartment in downtown Athens last week, you would think not.
Nothing in this apartment resembled Saudi Arabia. And the lady in front of me was not smiling when talking about her life as presented in her autobiographic book “Nightmares in the Saudi Arabian Desert.”
The story told is some years old but still a shivering one, and a story that describes the customs of the Arab world in the best possible way. Alexandra Simeonidou, the author, welcomed me at her home. I couldn’t resist asking about the book’s title.
“Why did you call your book ‘Nightmares in the Saudi Arabian Desert?'”, I asked. “If only I knew how my noble pilot would behave after we got married, I would have never taken this decision in my life”, she replied.
“The Arab world is so much different from ours”, she added. “Their rules are made for men. They live in a male society where women are nothing but a “pleasure instrument”, she explained.
“My prince had a dominant mother who did not like a ‘stranger’ bringing the first male heir of her family to life.”
“When I got pregnant he became a tyrant. He wanted me to be forced to a miscarriage. He hit me, he threw me down, he kicked my belly, he even stepped on it and he threw detergents to my body and face…. My life became a living nightmare. I was a prisoner at my own home! I could not escape. In order to travel, I needed the written consent of my owner – my husband…”

She takes a breath and explains that in the Arab world, women do not have the same rights as men. At gatherings, they sit separately. They go out only when they are escorted by their husbands or brothers. They do not have a say in family affairs.
“Marriage is like a business deal in Saudi Arabia.”
“A woman at the appropriate age is shown to potential husbands in pictures and if their families agree, the woman’s family offers the bride and receives money in return from the groom’s family.”
If a woman does not follow the rules of the Sharia law, she commits a ‘haram’, a sin.
“How did you manage to survive and deliver your baby?”, I asked next. “Thanks to my mother”, Alexandra replied.
“She came to Saudi Arabia to visit me, when I was pregnant. She lived this nightmare with me. She was a dynamic woman who wished to save her daughter. One day, she persuaded me to “escape” home. Traveling from one end of the house to the exit seemed like a journey that lasted forever. I was so scared, but we made it. We reached the exit and ran into the desert. We got into a convenience store at a long distance. The owner, a kind man, helped us and hid us under some food cans for a few hours. Then we got into a car that took us to the Greek Embassy. There, however, the authorities could not issue a passport for me, since I was married to an Arab. His consent was mandatory. I was taken to the hospital, as all the tortures I had suffered had weakened my body. At the hospital, a gynecologist from Egypt help me. He kept me there for a week. A week through which my mother and the Embassy tried to come to an agreement with my family to allow me to travel to Greece. In the end, I made it. I left this nightmare and came to Greece. I decided to write my story, my life…” “My son, now aged 25, has no particular relationship with his father, he is the hero of my other book, the ‘Saudi’s Son’”, she added at the end of my stay.
The book “Nightmares in the Saudi Arabian Desert” is part of Alexandra Symeonidou’s autobiographic trilogy. The two other books “Merciless Struggle” and the “Saudi’s Son” are not available in English yet. The book “Nightmares in the Saudi Arabian Desert”, since its launch at amazon.com a few weeks ago, became a best-seller and featured in the top 10 list of books related to Middle-East affairs.

Greek PM Kyriakos Mitsotakis stated on Wednesday that the country's national lockdown will continue due to a sharp increase in cases.
Environment