GRNews
GreekReporter.comGreeceWorld Cup: Greece loses to Costa Rica on Penalty Kicks in the...

World Cup: Greece loses to Costa Rica on Penalty Kicks in the Final 16 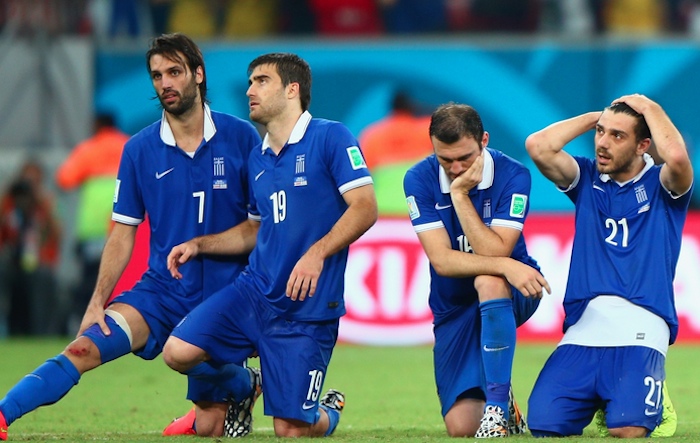 Costa Rica has advanced to the quarter finals of the FIFA World Cup after a dramatic ending resulting to a 5-3 win over Greece on penalties. In the 92nd minute Socratis Papastathopoulos equalized a Bryan Ruiz opener 40 minutes earlier.
A 1-1 tie which lead the game to extra time, where Greece dominated but couldn’t put the ball in the net. Specifically, a minute before the final whistle, Kostas Mitroglou whipped a shot to target which was saved by Navas K, Costa Rica’s MVP of the game, and took the teams to the penalty shootout. All first 7 penalties were scored, till Theofanis Gekas stepped up and missed his.
The game began cautiously in Recife as both teams focused on slowing the pace down. Anxious of each others attacking breaks, there were only half chances in the first half, besides a cross in by Cholebas at 42′ which had Salpingidis’ shot denied by, the outstanding in the whole game, Navas.
Minutes after the 2nd half started, Costa Rica thrilled their supporters with a stunning goal from outside the box, a play between Bolanyos and Bryan Ruiz which resulted in the latter passing the ball to the net.
All of sudden though, the tables were turned again as Oscar Duarte received a 2nd yellow for a strong challenge on Jose Cholebas which left the central American country with 10 players for a remaining 26 minutes.
The Greeks took over after Duarte’s red card and missed chances by the dozens. Costa Rica reminded us of Greece when they were playing with a man down against Japan. Just when CRC was about to steal a victory, center back Sokratis Papastathopoulos stung the crowd. Fanis Gekas first shot was saved by Navas but Sokratis took the rebound and scored in the dying minutes of stoppage time.
With a man down Costa Rica seemed to lose their cool, but Greece could not find any way through. All crosses in the box were cleared and even the couple that made it to the Greek strikers were blocked out by Navas.
Costa Rica’s defensive efforts took them to the penalty shootout where they converted all penalties. The final one by Michael Umana saw the Costa Rican bench hugging each other for they make the quarter finals for their first time in history. They will be facing the Netherlands on July 5th.
Fernando Santos’ last game coaching the Greeks saw them almost clinching the win. The Portuguese’s contract expires tomorrow and Claudio Ranieri will be taking his spot to help them in the Euro 2016 qualifying rounds.