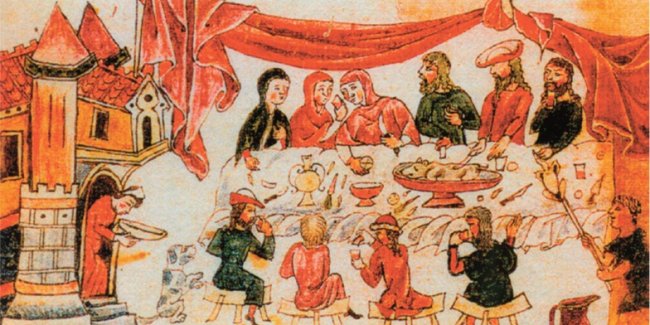 On Saturday July 19 a special program at the Getty Villa will highlight the culinary world of the Byzantine Empire (A.D. 330-1453). At the Byzantine Table: Greek Traditions, Roman Tastes features a lecture by food historian Andrew Dalby followed by a four-course dinner inspired by the gastronomy of Byzantium.

Dalby begins his exploration of Byzantine cuisine by tracing its ancestry through the symposia of classical Greece and the royal luxuries enjoyed by Hellenistic Greek dynasties of Syria and Egypt, to the increasing sophistication of the late Roman Empire, which was nourished by the trade in spices and aromatics from the distant corners of the ancient Mediterranean world. Dalby reveals how this unique culinary culture can be approached from many perspectives, including texts, paintings, and antiquities, as well as the observations of medieval travelers—whether diplomats from East and West, Crusaders, pilgrims, or Viking mercenaries—who expressed in their own words how Byzantium tasted.

The evening will continue in the Inner Peristyle garden with a four-course seated dinner inspired by the cuisine that emerged from the convergence of so many cultures and traditions. While Byzantine cooks clung to traditional late Roman methods of preparation, they continuously sought out new flavors, never ceased to innovate, and increasingly adapted Muslim and Eastern influences.

Menu highlights include lamb served with oinogaros sauce, a synthesis of ancient and medieval tastes combining fish sauce, wine, honey, Mediterranean herbs, cinnamon, clove, pepper, and costus, an an ancient ingredient for both food and incense. Eggplant—one of several vegetables first introduced to the Romans from the Middle East—is grilled and served with shaved bottarga (salted mullet roe). Rice pudding, the original “food of angels” and a favored dessert of the Byzantines, is garnished with exotic ingredients introduced from faraway places: cherries from Pontos (northern Turkey) and candied citron, a fruit originating in Burma and arriving in Constantinople through Iran, also the source for sugar, a luxurious commodity for the elites of the later Byzantine Empire.

The evening’s meal will be prepared by Bon Appetit’s culinary team Chef Mayet Cristobal and Chef Fernando Cayanan in consultation with food historians Sally Grainger and Andrew Dalby. The program complements the exhibition Heaven and Earth: Art of Byzantium from Greek Collections, which will be open for viewing after dinner between 9:00 and 10:00 p.m. Tickets go on sale July 1 at 9:00 a.m. and will be available via Getty Visitor Services or call 310-440-7300.

Further information and a full menu are available here.