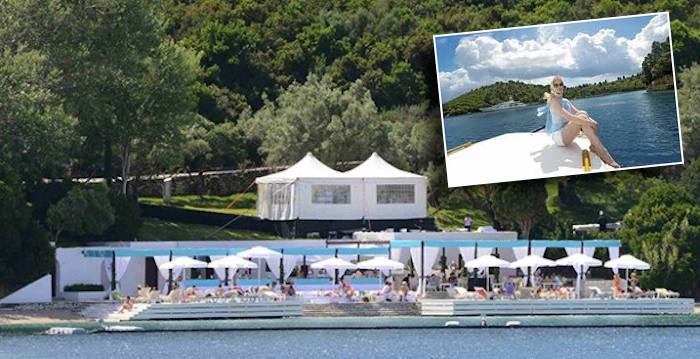 The Greek island of Skorpios was filled with rich and famous people from all around the world on the occasion of Ekaterina Rybolovleva’s 25’th birthday. Full of joy she stood beside her father in Skorpios celebrating her 25th birthday.
The festivities began shortly after 12pm and lasted all day. Early this morning, several guests arrived in Aktio and were later transported to the island via helicopter.
The birthday party included a lot of dancing, Greek food and many surprises which included a jet ski acrobatics show that amazed guests earlier in the day.
Later, people were divided in two teams and dressed as pirates for a treasure hunt which took place both in land and sea. In order for the game to be realistic the Rybolovlev family rented a pirate boat. Furthermore, the guests were given weapons with laser marks, so when someone was “hit” his costume would vibrate.
According to the family representative: “Katia chose to celebrate her birthday in Greece because she values the country and its people. She feels very close to Greece and its people, who inspired her to ask guests to donate money to support charities that help children in Lefkada and the rest of Greece, instead of bringing her gifts.”
The guests of the family started arriving in Skorpios on Tuesday. Most of them will be staying in a small cruise ship. A company that organizes similar events has taken over the activities that will take place during the next three days. Moreover, the family representative added: “On behalf of Katia, I would like to thank the Greek police and Coast Guard, as well as local authorities and the people of Lefkada for their help in organizing the birthday party.”
[youtube]4eMd7d2J_Fg#t[/youtube]