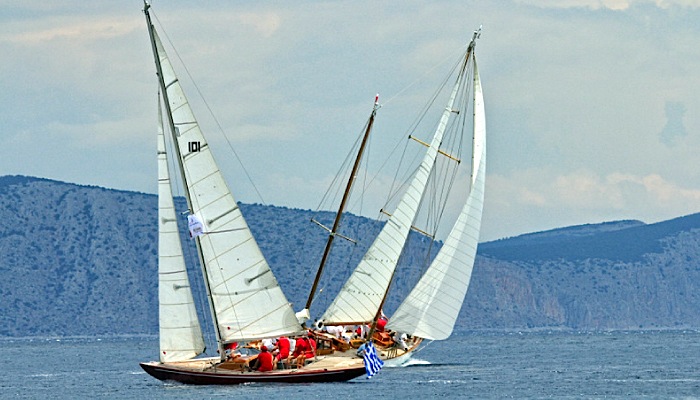 After three successful races in 2011, 2012 and 2013, the 4th Spetses Classic Yacht Race will take place from the 19th to the 22nd of June 2014. The event is organized by the Yacht Club of Greece and Poseidonion Grand Hotel , which this year celebrates 100 years of operation.
The yachts participating in the SCYR 2014 are again divided into four categories: Classic Yachts – with three subcategories depending on the construction date: Vintage (until 1947), Classic (1948-1975), Spirit of Tradition (1976 onwards), Traditional Caiques, Latinia and introducing for the first time the Dragon category.
“For the fourth year running, the YCG is organizing the SCYR on the island of Spetses with the belief that this year’s race will be even more successful, a fact guaranteed by the long running experience and human resources of the YCG. The SCYR has been established as an international institution and one of the most popular classic yacht races in the Mediterranean, said President of the SCYR Organising Committee and Vice President of the Governing Body of the Yacht Club of Greece, Nondas Labadarios.
Antonis Vordonis, CEO of the Poseidonion Grand Hotel and captain of the ‘Tincano’ (1936) states: “2014 is also a special year for the Poseidonion Grand Hotel because we are celebrating 100 years since it first opened its doors. The revival of this historic hotel aimed at the development of Spetses Island, continuing the vision of National Benefactor Sotirios Anargyros. As Hospitality Organisers of the Spetses Classic Yacht Race 2014 we continue to support and develop that vision”.
Chivas Regal, Golden Sponsor of the event, will once again present the “Spirit of Chivalry – Chivas Honour Award – Spetses Classic Yacht Race 2014” to the crew which demonstrates high skillfulness and team spirit during the races.
The Spetses Classic Yacht Race 2014 has also enriched its programme with social events, such as the Welcome Cocktail, the popular Souvlaki Party, the Awards Cocktail as well as a discussion between the Olympic Medalists and the audience, which will be held for the first time at the Museum of Laskarina Bouboulina.
Corfu Classic Yacht Race
The Spetses Classic Yacht Race will have a feeder race, Corfu Classic Yacht Race. The Corfu Classic Yacht Race will be held between 12-14 June 2014 on the Ionian sea waters of the aristocratic island. A route to Spetses is planned with small islands and picturesque ports playing host and welcoming yachts on their way to the 2014 edition of the Spetses Classic Yacht Race offering racers a unique gateway to a summer of racing in some of the most beautiful waters in the world. For this purpose it will be held one week before the event in Spetses.
“Weather conditions are excellent in June and the racing schedule will intrigue participants as well as on-shore spectators who will be rewarded with breathtaking views and beautiful boats sailing out to sea with the ancient castle ruins as the perfect backdrop for the spectacular classic yachts and traditional caiques,” said the organizers.
The Corfu Classic Yacht will have Classic Yachts with a valid 2013 C.I.M. Certificateas well as “Spirit of Tradition” Yachts with a valid 2013 IRCCertificate in accordance with C.I.M. Rules. There will also be the hugely popular Aegean Classic Schooner (Caique) category as well as a small open boat (lateen) category