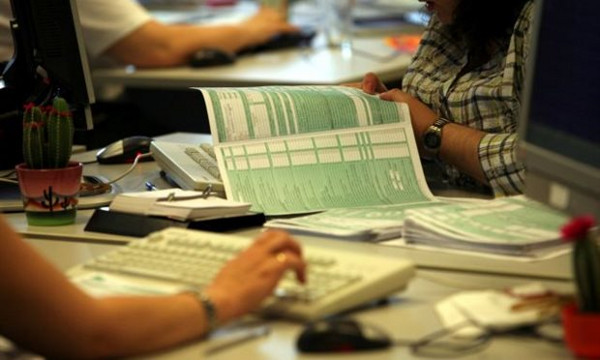 Greek citizens and businesses ran up a further 4.325 billion euros of debt to the taxman between January to April, taking the total owed to 66 billion euros.
Finance Ministry data shows tax debts are increasing by an average of one billion per month in 2014. In January, the amount of tax debts was 962 million euros, in February the amount rose to 1.39 billion and in March and May tax debts were up to 1.2 billion and 736 million euros respectively.
Greek tax authorities have collected 1.134 billion euros of back taxes so far this year, 702 million of which were accrued last year. A further 233 million euros of debt were eventually written off.
In order to clamp down on tax evasion, the General Secretariat of Public Revenue has strengthened its inspection efforts at large businesses, offshore companies and wealthy citizens. In April alone, 415 inspections were carried out.
Of 804 full inspections of large businesses conducted, 131 resulted in fines worth 190.53 million euros being imposed, 55.73 million euros of which have been already collected. As far as partial audits of large business are concerned, 168 out of 370 have resulted in 22.8 million euros worth of fines imposed. Finally, 116 out of 397 inspections of offshore companies, wealthy citizens and taxpayers with overseas accounts have been completed so far.