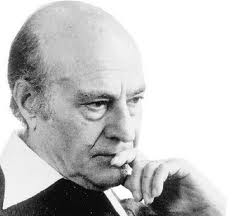 Harvard University has published the two last collections of the Greek poet Odysseas Elytis, Oxopetra Elegies and West of Sorrow. Both collections, translated by David Connolly, are included in the series Harvard Early Modern and Modern Greek Library. The 100 page volume contains an extensive introduction, notes, timeline and the poet’s bibliography in English.

In the introduction of the book , David Connolly states that the poems included in these two collections constitute paeans to life and not elegies on death as many critics hastily concluded. Connolly claims that both works are Elytis‘ poetic testament.

Elytis is regarded as one of Greece’s major poets and a major exponent of  romantic modernism in Greece and the world.  In 1979 he was awarded with the Nobel Prize for Literature while most of his works have been translated in many languages. According to the official announcement of the Swedish Academy, the Nobel Prize was awarded to Elytis “for his poetry, which, against the background of Greek tradition, depicts with sensuous strength and intellectual clear-sightedness modern man’s struggle for freedom and creativeness.”