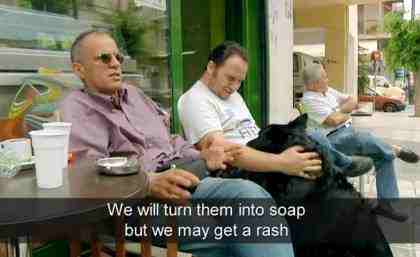 Greece’s Supreme Court Friday ruled in favour the cleaners suspended from the Ministry of Finance, which had appealed a previous ruling to reinstate the janitorial staff, who are continuing their sit-in outside the building while their former employer refuses to give them their jobs back for fear of jeopardizing Greek government’s job-cutting plans.
Some 400 cleaning employees were suspended in September 2013, as part of the availability measures implemented by the government, and are facing dismissal nine months later.
After several mobilizations (or rather, immobilizations) and protests over the past few months challenging their suspension and future dismissals, the First Instance Court of Athens cancelled the 397 dismissals from the Greek Finance Ministry, deeming them unconstitutional.
According to the court order, the suspended employees must be reinstated in their positions immediately. However, Secretary of Revenue Haris Theocharis said that he would not implement the court’s decision and that the cleaners’ reinstatement is a political decision.
Following that announcement, a lawsuit against any person responsible was submitted last week to the Misdemeanors Prosecutor in Athens by the cleaners’ union, in order to investigate the reasons behind the ministry’s decision not to follow the court’s order.
The Finance Ministry, after consulting with government lawyers, referred the matter to the Supreme Court and appealed against the First Instance Court’s decision, fearing that the decision will set a precedent and will put at risk the ministry’s suspension and dismissal plans. However, the Supreme Court dismissed the case on May 23.