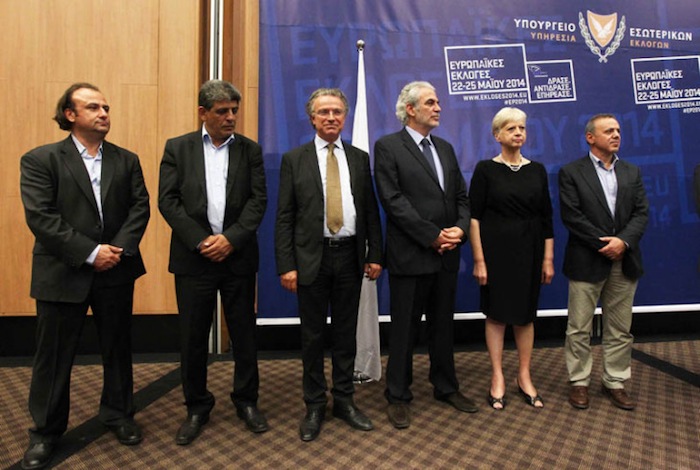 Cyprus elected its six MEPs without political surprise Sunday night, but only 44% of voters turned out, bringing the abstention rate to an unprecedented 56%. However, as many as 37,000 Turkish Cypriots were left out of the ballot due to supposed bureaucratic failings. Nevertheless, Republic of Cyprus President Nicos Anastasiades said the low turnout is a major concern that requires discussion both on the EU level and among political forces.
“It is important to convince European citizens, through proper policies that respond to their needs, that Europe and its institutions are on their side, so that they may participate dynamically in European affairs,” he said.
Sunday was the first time so many Turkish Cypriots have had the right to vote in an election in the south, and there were five Turkish Cypriot candidates running for office. Nevertheless, official data show that only 1,867 – or 3% – of the 58,637 eligible Turkish Cypriots residing in the north actually cast their ballot, while reportedly around 400 tried but were rejected at polling stations for not being on the electoral roll.
One candidate, Sener Levent, publisher of Turkish Cypriot newspaper Afrika, said “these elections are not legal” because 37,000 Turkish Cypriots were denied the vote as they were not placed on the electoral registrar. “The government must be accountable to the courts on this issue,” he said. He garnered 2,718 votes in the election, suggesting some support in the south.
Another candidate Deniz Birinci said: “This is a huge infringement of human rights and of people’s democratic and civil rights … I call on all the authorities and the EU to keep an eye on what’s going on here.”
Mehmet Pasa, 44, told AFP he was given no reason why he was prevented from voting at a polling station in Nicosia. “I came here to cast my vote but I couldn’t. When I demanded an explanation, they said I was making trouble and they asked me to get out,” he said.
At one Nicosia polling station, set up for Turkish Cypriots crossing over, some were informed that they could not vote as their names were not on the electoral roll as no registered address was provided, prompting the republic’s Interior Minister Sotiris Hasikos to visit polling stations to say that only those with a registered address were allowed to cast a ballot under Cyprus’ electoral law.
However, under a March 2013 amendment, some 90,000 Turkish Cypriots adults with Republic of Cyprus ID cards living in northern occupied territories were granted voting rights without having to register on the electoral roll, whereas everybody in the south has to register to vote upon turning 18. Furthermore, systemic clerical errors were made when entering addresses of some 30,000 Turkish Cypriots onto the government database from which the electoral roll is derived.
Hasikos had a heated exchange with Birinci, part of the pan-Cypriot DRASY-EYLEM platform that received 2,220 votes, who highlighted the administrative failings of the Republic’s database. She has told Turkish Cypriot media DRASY-EYLEM would ask for the annulment of the elections if necessary, while the group’s Alev Tugberk told daily Kibris Postasi they would take the case to the European Court of Human Rights.
The election commissioner in Cyprus dismissed calls for an annulment of the election, citing the low turnout, while pointing out the interior ministry went out of its way to help Turkish Cypriots participate in the election, and even laid on buses to transport Turkish Cypriots from checkpoints to polling stations and back.
IN the end, Democratic Rally (DISY) received 37.75% of the votes cast, AKEL 26.98%, Democratic Party (DIKO) 10.83% and EDEK/Greens 7.68%.
As such, DISY will send two MEPs, Eleni Theocharous and former government spokesman Christos Stylianides.
AKEL also returned two MEPs – Takis Hadjigeorgiou and former trade minister Neoclis Sylikiotis, while DIKO and EDEK/Greens posted one MEP each, academic Costas Mavrides and EDEK’s central committee secretary Demetris Papadakis respectively.