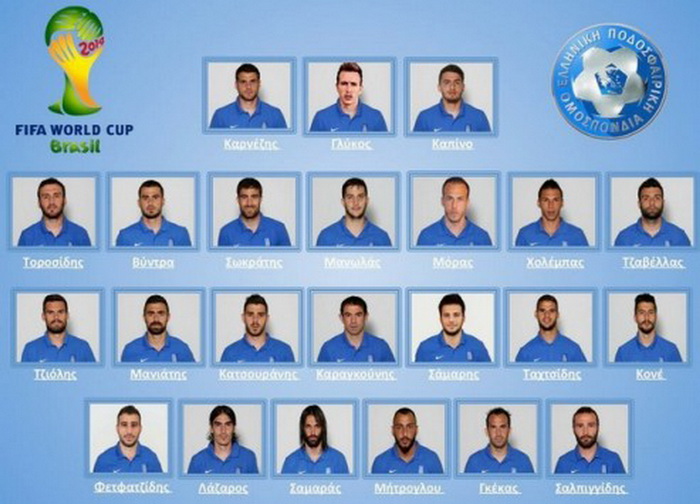 Greece’s national football team head coach Fernando Santos offered no surprise selections in his 23-man squad for next month’s 2014 FIFA World Cup in Brazil, announced Monday.
Goalkeepers: Orestis Karnezis, Panagiotis Glykos, Stefanos Kapin
Defenders: Kostas Manolas, José Holebas, Sokratis Papastathopoulos, Vasilis Torosidis, Giorgos Tzavelas, Loukas Vyntra, Vaggelis Moras
Midfielders: Alexandros Tziolis, Andreas Samaris, Giannis Maniatis, Kostas Katsouranis, Giorgos Karagounis, Panagiotis Tachtsidis, Ioannis Fetfatzidis, Lazaros Christodoulopoulos, Panagiotis Kone
Forwards: Dimitris Salpingidis, Giorgios Samaras, Konstantinos Mitroglou, Theofanis Gekas
“The only selection criteria was to pick players who make me feel safe concerning tactics, and are in good physical shape. Until 3-4 weeks ago, I wasn’t 100 percent about all the choices, like Mitroglou, whom at the time I hadn’t seen on the field. I saw him, finally, he seemed okay and I took him. I would like to have seen more players, but this wasn’t possible, and therefore they are not in the final team. From the moment we had to provide FIFA with 30 members, I had no doubts -more or less- about the final composition,” Santos said of his selection of the Greek national team.
Santos also announced that he will be taking amateur footballer Manos Sergios, who has played for football teams in Brazil. Sergios is said to help the efforts of the Greek national team, providing insight on the rival teams and their tactics.