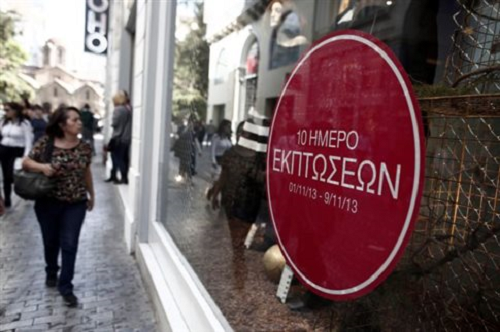 The Federation of Private Employees (OIYE) has called a 24-hour strike on May 4 for retail workers in protest at shops opening on the first Sunday of the mid-season sales period in Greece. They have also planned a protest outside Athens shopping centre ‘The Mall’ at 11:00 on Sunday morning.
OIYE says that thousands of employees were forced to work on the Sunday before Holy Week and were still waiting to be paid, while most shops reported a rather low turnover for that day.
“Consumers did not shop, they just went for a walk. Small businesses, having been exhausted, try to catch up with the competition of powerful, leading foreign chains, large shopping centers and discount villages, by opening on Sundays with unsustainable operating costs,” according to OIYE’s announcement.
The newly established mid-season sales, including one optional Sunday on May 4, will be held from May 1-10 based on new laws passed in 2013. Given that May 1 is a mandatory bank holiday, this effectively means that the sales period will start next Friday, May 2. Shops can also choose to stay open on May 4, the first Sunday within the sales period, for a maximum period of 11:00-20:00.