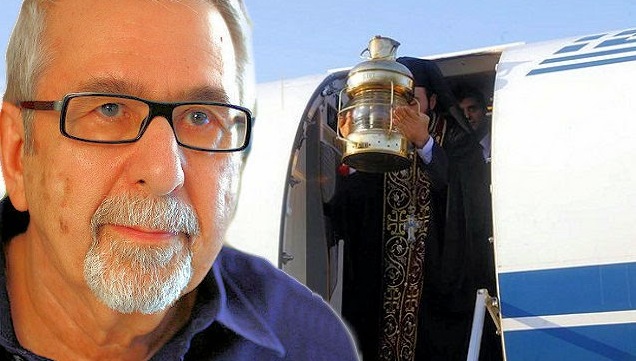 The Greek writer Nikos Dimou suggested on Wednesday that since the Holy Fire, which is brought every Holy Saturday from Jerusalem, is not a result of a miracle, then Greece should stop spending money on hiring a jet to bring it to the Greek capital, Athens.
Greek politicians from various political parties such as New Democracy, Independent Greeks as well as the Greek Communist Party (KKE) lambasted the Greek writer for questioning traditional customs that have been a significant part of Greek history and religion. Indeed, KKE’s MP Liana Kanelli referred to Nikos Dimou “as an Easter attraction, like Ben Hur on TV.”
In an attempt to strengthen his point, Mr. Dimou in an article stressed that Christ would have preferred to help the poor rather than pay to transport the Holy Fire from the Holy Sepulcher in Jerusalem to Greece.
As Mr. Dimou appears to be one of the highest supporters of the new Greek political party To Potami, which was recently formed by the journalist Stavros Theodorakis, the writer’s suggestions on the Holy Fire transportation took a political turn.
Mr. Theodorakis defended the writer’s right to express his opinion on the matter highlighting that “I am running to become a politician, not a bishop. We should not seek to take advantage of people’s faith. It is not right for politicians to play on people’s religious sentiment.”
According to Orthodox Christianity, every year on Holy Saturday in Christ’s tomb, the Holy Fire appears, lighting the candles of a small group of priests who gather there to harvest the Holy Fire by bringing it to Athens and for distribution to Greek churches.