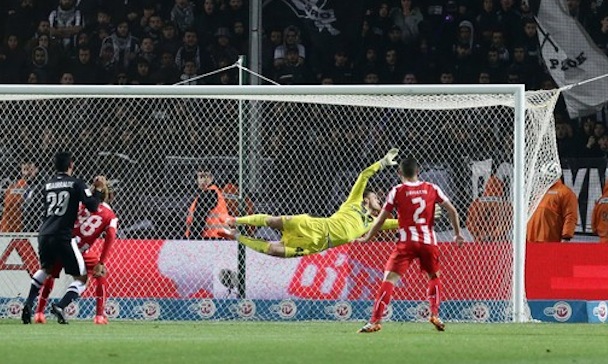 The Greek Cup semi-final second leg match between PAOK and Olympiakos was held up for over an hour on Wednesday after PAOK fans set the Greek champions’ bench on fire.

PAOK won 1-0 to overturn its 2-1 deficit from the first leg in Piraeus thanks to a goal by Stefanos Athanasiadis two minutes into the second half.

The two teams ended the game with 10 men each due to the red cards shown to PAOK’s Bibras Natkho and Olympiakos’s Yiannis Maniatis, with the referee blowing his whistle after 15 minutes of injury time to end a match marred by sporadic fighting between edgy rivals throughout the second half.

After the final whistle, home fans stormed in to attack the Olympiakos players on the way to the locker room, with Maniatis and Nelson Valdez getting hit, according to Olympiakos.

Some unprecedented things occurred before the kick-off of the Greek Cup semi-final second leg between PAOK and Olympiakos at the Toumba stadium in Thessaloniki, north Greece.  Traditionally, fixtures between these two teams are nervy affairs due to their fierce rivalry. 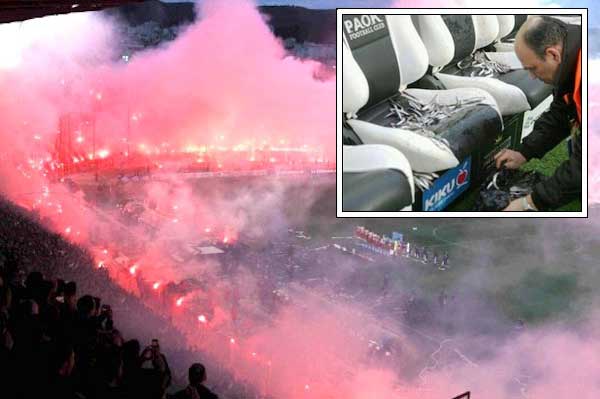 he tickets for this crucial second leg at Toumba stadium had sold out, and as the two teams entered the pitch, PAOK fans lit thousand of torches and smoke bombs, some of which were thrown at the Olympiakos players and bench. PAOK fans also threw fish at the Olympiakos bench. As a result, the referee ordered the two teams to leave the pitch and return to the dressing room. He postponed the match until guarantees are given over players’ safety.
We have seen a lot of weird and grotesque things happening at Greek stadiums, but this is the first time that a team’s fans threw fish at the opponent’s bench in order to mock them. The Olympiakos nickname is “gavros” which means anchovy. What is more, few hours before the kick-off major clashes occurred between the PAOK’s fans and the Greek riot police officers. The police used tear-gas to disperse the fans.
Panathinaikos earlier managed to beat OFI 3-0 (first leg 0-1; 3-1 aggregate) to get a shot at PAOK in the Greek cup final at Athens’ Olympic Stadium on Saturday, April 26.