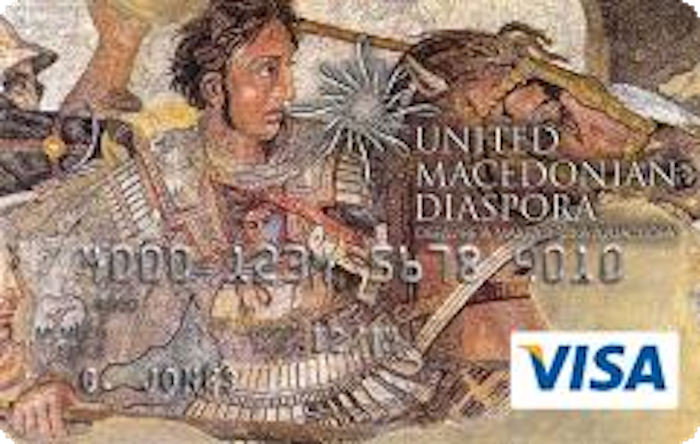 It has been a few years since the new Visa card, ‘Macedonian Visa,’ was introduced in the US. In a program to collect donations, the NGO United Macedonian Diaspora through Visa CardPartner Inc designed the Affinity Credit Card which comes in different designs, one depicting Alexander the Great.

The dispute between FYROM and Greece for the name Macedonia dates back to 1991 when FYROM gained independence from Yugoslavia and started calling itself Macedonia, a region in Northern Greece.  Such propaganda moves by FYROM’s allies  trying to falsify history by issuing a card depicting Alexander the Great as their king, definitely do not help resolve the name dispute.

The NGO, which lobbies for FYROM in the USA and abroad, states in its website:

According to its website, United Macedonian Diaspora (UMD) was founded in 2004, as an international non-governmental organization addressing the interests and needs of ‘Macedonians’ and ‘Macedonian’ communities throughout the world.

The core of the disagreement is the use of the name Macedonia (part of northern Greece) as well as other symbols of Greek culture by FYROM. The most significant of these symbols is Alexander the Great, the Greek King of Macedon who founded one of the most important empires of the ancient world.

In 2011, the government of FYROM unveiled a major statue of Alexander the Great in the central square of the nation’s capital, Skopje, causing anger in Greece.