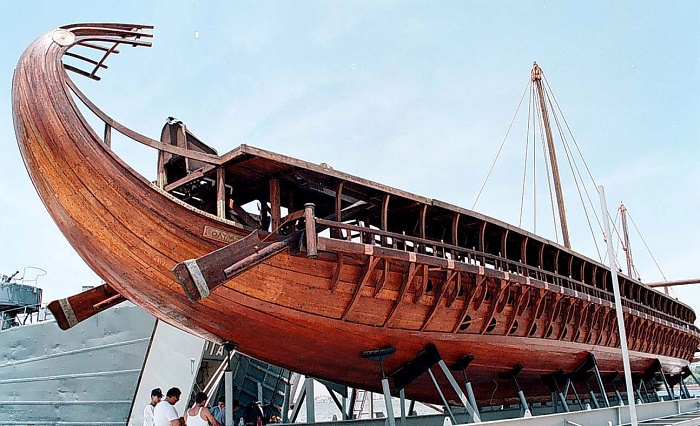 If you decide to watch the movie “300: Rise of an Empire” you will see a replica of the ancient trireme “Olympias.” One might wonder how the filmmakers were able to make an exact replica. The truth is that they asked the Greek Navy to provide them with construction plans. Seeing as the movie is based on Greek history and depicts real facts – perhaps a little altered to fit an action movie — their wish was eventually granted.
The exact copy of the trireme, in its original size, was built between 1985-1987 in Greece, at Tzakakos shipyards in Keratsini, under a program implemented by the ministries of Defense and Culture in collaboration with the Greek National Tourism Organization and the Nautical Museum of Greece. Plans for its construction were provided by the “Trireme Trust” in Britain and the project was funded by the Greek Navy. The trireme was used during the Athens 2004 Olympic Torch Relay.
The engineering drawings for the trireme were used as the basis for the graphics (CGI) of Greek ships in the film, in order to achieve the greatest accuracy possible.
So far so good, although the Navy is uncomfortable with the fact that the ancient trireme is being exploited by a website which charges for the trireme’s photographs according to their quality.